The Last of the Formlings is the twenty-fourth episode of the eleventh season, and 122nd overall of LEGO Ninjago. It aired in Malaysia on September 21, 2019. It aired in the US on January 11, 2020, paired up with "My Enemy, My Friend."

Akita tells the story of the Choosing and how she and her twin brother, Kataru, went into the wilds to discover their animal forms.

Back before the Ice Emperor began his reign, the Never-Realm was a peaceful place where Formlings were able to thrive together. However, Akita and her brother, Kataru, were younglings and had not found their animal form. Akita thinks she will not find her animal form, but her brother believes she will find her form.

When the ceremony began, Akita’s heart was racing, but the induction was soon interrupted by Vex. He claims he was unable to find his animal form and was mocked by the villagers who had their animal form. Vex tells them he discovered an Elemental Power and plans to return in force unless they pledged their alliance to him. No one does and he walks away.

After the ceremony, Akita and Kataru venture far away from their village in search of their animal form. One night, Akita is beckoned by her name and follows it into the sky. There, a wolf appears and runs away from her. Nevertheless, she is able to chase it down and obtains her animal form, a wolf.

Once gaining her animal form, Akita realizes her discovering before nearly being attacked by a bear. Upon noticing, Akita realizes it is Kataru, who had gained the form of a bear. They then race back to the village to celebrate their accomplishments.

When the siblings return, Akita sits on a rock before spotting Boreal, the fierce Ice Dragon. Akita quickly heads home, where she is shocked to find most of her people frozen. On the horizon, she sees Vex and the Ice Emperor watching the events unfold. She is disgusted by their acts and attempted to seek vengeance, but Boreal attacks Akita.

Luckily, her brother arrived in time to defend her and takes a swipe at Boreal, injuring the creature. The beast retreats and attempts to attack Kataru. Akita warns her brother to retreat, but he doesn’t heed her warnings and is unfortunately frozen by Boreal. The terrified Akita witnesses the Ice Emperor and Vex leave, while she looks upon the destruction caused by them and sees her entire family frozen solid. Weeping at her loss, the devastated girl leaves the village, never to return.

Feeling sympathy for her, Lloyd tells Akita the reason he was heading to the Ice Castle, is to rescue Zane. Akita soon got out a dagger and proclaims to Lloyd that he may be seeking to rescue his friend, but she seeks revenge for the Formlings. 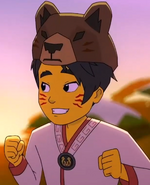 "You seek to rescue your friend. I...seek revenge."

Add a photo to this gallery
Retrieved from "https://ninjago.fandom.com/wiki/The_Last_of_the_Formlings?oldid=383258"
Community content is available under CC-BY-SA unless otherwise noted.