The Making of the Movie

The Making of the Movie

The Making of the Movie is a book for The LEGO Ninjago Movie. It features a foreword from Dave Franco.

Journey beyond the on-screen world of The LEGO® NINJAGO® MOVIE™

Packed with stunning concept art, sketches, artwork, inspiration and LEGO® builds, the book tells this fascinating story of how The LEGO NINJAGO MOVIE was made. Find out how your favorite heroes, villains, vehicles, and locations were created for the movie. Learn about each development stage of the movie, from the initial idea and storyboarding to recording the dialogue and special effects. Created with the LEGO Group, with exclusive insights from the filmmakers, animators, and LEGO designers.

Modern Skyline
As beautiful as the natural island around it is, modern-day Ninjago City is a feast for the eyes with all its detail and color. Asian and LEGO influence on fun and modern architecture can be seen in every inch of this cityscape.

The Bridge
During the course of the jungle expedition, Master Wu and the ninja encounter natural bridges formed by tree roots. There's also a long rope bridge that proves to be particularly challenging—it's a real cliffhanger moment, in fact!

The Green Ninja
Green Ninja Lloyd leads the Secret Ninja Force with great energy and charisma. Even though he wrestles with his past and his complicated family, Lloyd knows that when he is in ninja mode he must always do what is best for the citizens of Ninago City.

Lord Garmadon's Volcano Lair
Garmadon has established his home base on a volcanic island off the coast of Ninjago City. The dark, mysterious, fiery, and hard-to-access locale is the perfect nest of an evil warlord.

Ninjago City Models
LEGO designers have one of the best jobs in the world—playing with their imagination and some really cool materials every day. Some amazing multi-level builds came out of a "boost session" of a brainstorm building, putting creativity on top of creativity to construct a truly layered Ninjago City model. 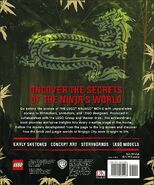