Michael Antonakos (Seasons 6 and 11-present)
Alan Marriott (Season 8)
The Mechanic is a well-known criminal and a former employee of Master Chen who was at one point imprisoned in Kryptarium Prison. During the Second Serpentine War, the Mechanic was affiliated with the Anacondrai warriors, repairing noodle trucks for the underground crime organization. After the Anacondrai warriors were banished, the Mechanic went out of business with his employer having been cursed. Due to his involvement with Chen, he was locked up in Kryptarium Prison, where he earned the name "The Mechanic."

After the Battle of Stiix, the ninja were imprisoned in Kryptarium after being framed for several crimes. Upon entering the prison, they were confronted by the inmates, including the Mechanic, who was vengeful after the ninja defeated Chen and put him out of work. When the inmates started fighting the ninja, the Mechanic went after Zane to steal some of his robotic parts but thanks to P.I.X.A.L. he was stopped from doing so. Following Jay's final wish, the ninja were never sent to Kryptarium and the Mechanic didn't confront them.

At some point, the Mechanic escaped Kryptarium Prison, but was defeated by Kai and Zane and was subsequently placed back in prison.

While still in Kryptarium Prison, the Mechanic strikes a friendship with Ultra Violet, over their mutual hatred for the ninja, and conspire to break out, only to be recaptured by Samurai X.

However, the Mechanic managed to escaped Kryptarium Prison again and associated with a mysterious AI named Unagami.

During and after Tournament of Elements

Before Master Chen's banishment to the Cursed Realm, the Mechanic made money repairing the noodles trucks of the Anacondrai warriors. After their defeat at the Corridor of Elders, the Mechanic was arrested and sent to Kryptarium Prison where he swore revenge on the ninja with the intent of tearing Zane apart for parts.[1]

When the ninja arrived at Kryptarium for being framed for a crime spree, the Mechanic opened his and several other inmates’ cell doors, leading them to confront the ninja. Explaining his situation to Lloyd, he demanded they hand over Zane to use as spare parts in exchange for the grievances he believed the ninja had caused. However, before he could take any action, Warden Noble arrived, ordering him and Lloyd to shake hands.

During the following meal in the cafeteria, the Mechanic confronted the ninja again but was dismissed by them as at most a fourth-tier bad guy. Infuriated, he started a fight during which the Mechanic dragged Zane away, determined to take him apart. However, an electric shock orchestrated by P.I.X.A.L. sent the Mechanic flying back and he was returned to his cell by the guards before he was able to inflict any further damage to the Nindroid.

The Mechanic manages to somehow break out of Kryptarium Prison and fights Kai and Zane with a new flamethrower robo-arm at Ninjago Harbor. However, Zane manages to freeze the villain in place.

When Cole is riding his Earth Driller, Warden Noble calls him and informs him that there are problems in the Kryptarium prison. Cole guesses what happened and mentions the Mechanic and Sons of Garmadon.

Later, the Mechanic was seen in the Kryptarium Prison several times, sharing one cell with a Sons of Garmadon member, watching the fight between Cole and Giant Stone Warrior, and later throwing random objects at Cole, for defeating and placing Giant Stone Warrior and Killow back into their cells.

While in the exercise yard, a newspaper comes at the Mechanic, who reads it, and discovers that the ninja are gone before relaying the news to Ultra Violet, who tells him they breakout after lights out. Later that night after the guards turned off the lights, the Mechanic used his robo-arm to get the keys to his and Ultra Violet's cells before they escape through a tunnel she had dug in the prison. Once they reached the sewers, the Mechanic and Ultra Violet argue about who they thought was the worst (Zane or Nya) before Fugi-Dove shows up, telling them it is Jay. Once they heard Ultra Violet's story about her capture, the Mechanic tells her and Fugi-Dove about the time Nya stopped him and later stole his Noodle Truck of Crime before eventually listening to Fugi-Dove's story about his hatred for Jay, only to easily find it false, until they reach a grate, and start to make plans for crime breaking, only to end up captured by Samurai X when they had inadvertently triggered her hidden sensors, resulting in the three recaptured prisoners to proclaim her as the worst.

After Secrets of the Forbidden Spinjitzu

Sometime at this point, the Mechanic managed to break out from Kryptarium Prison again. Then he was confronted by Unagami and he decided to help him with his plan, thus beginning preparations for the release of Prime Empire. Unagami then created or improved the Mechanic's Noodle Truck of Crime. The Mechanic was also associated with his henchmen by this point.

When Nya and Jay arrive at Benny's Arcade Emporium, Lloyd calls them and notifies them that they've received a report of the Mechanic breaking into a warehouse.

The Mechanic and his henchmen enter an old electronics warehouse and steal the Prime Empire motherboard. However, they are spotted by the ninja so he escapes in his noodle truck. After a short chase through the streets, he is captured and arrested when Cole ties him to a pole.

While the ninja were investigating his hideout, Jay finds an old arcade cabinet which is titled Prime Empire. He inserts the recovered motherboard into the cabinet and a wave of red energy bursts from the machine. Before being escorted to the Ninjago City Police Station, he laughs wickedly as he hears the shockwave of red energy pass through.

The Mechanic was interrogated by the ninja about the mysterious V-shaped symbol as well as Unagami, the latter surprising him. He then told them it was too late and it had already started. Lloyd then has the Commissioner take the Mechanic away while he gloats. As he was still gloating with officers dragging him, he peeks his head at the doorway to resume gloating before the Commissioner closes the door on his face.

The Mechanic was able to escape the prison and convinced the prisoners (except Fugi-Dove) to work for Unagami.

Later, the Mechanic and the prisoners invaded Borg Tower to retrieve the original Arcade Pod. When they finally make it upstairs, the prisoners fight off the ninja and the Mechanic tells Lloyd that Unagami plans to start a new revolution and that he'll be serving at his side. Moments later, Lloyd attempts to enter Prime Empire but was stopped by the Mechanic. However, the Mechanic was pushed by Zane, allowing the ninja to enter Prime Empire while Zane escapes with P.I.X.A.L. and Cyrus Borg. When Soto tried to go after him, the Mechanic stops him, saying that they're only at Borg Tower to retrieve the original Arcade Pod. Although, when the Mechanic pressed the start button, the Arcade Pod wouldn't work, as Zane took the Prime Empire motherboard when he escaped with P.I.X.A.L. and Cyrus.

Once the Manifestation Gate was complete, an anger-riddled Unagami escaped Prime Empire, along with his armies and the AI within the game. The Mechanic and his henchmen were overwhelmed by the spectacle and, ironically, ran away from the master they were serving. It is unknown if he was tracked down and rearrested following Unagami's surrender and redemption.

The Mechanic is sadistic, such as when he attempted to remove parts from Zane and used him to power up the Manifestation Gate.

He also has a bit of pride, as when he made up the story about how Nya stole his noodle truck.

At rare times, he was a coward, such as when he ran away after the Manifestation Gate started to go unstable.

The Mechanic is a middle-aged man with brown teeth and one golden tooth and small mustache. As shown in his anime version, his eyes are gray. He originally had circles under his eyes, cheekbones and wrinkles on his face, but those have disappeared since the animation studio changed from WILFilm ApS to WildBrain. He always wears a black hat with on which is placed a piece of a nindroid mask with three blue lights that covers his eye. These lights are red in Season 8. Since Season 11 he has a red ribbon on his hat. He does not have a left arm, so he has a robo-arm instead, which has two versions, either regular or as a flamethrower.

When enclosed in the Kryptarium he has a plain white prison jumpsuit with gray stripes and gray legs. He doesn't have a sleeves. He has metal parts and cables on the jumpsuit that hold his robo-arm.

In his civilian clothes, he has a beige sweater, on which he has placed metal parts and cables that hold his robo-arm. He also has a long torn red coat, pale gray pants and since Season 11 he also has gray shoes.

The Mechanic vs. Zane
Add a photo to this gallery

The Mechanic talks with Lloyd

The Mechanic with other Kryptarium inmates

The Mechanic confronting the ninja

The Mechanic in a flashback

The Mechanic frozen by Zane
Add a photo to this gallery

The Mechanic in the cell with SOG member 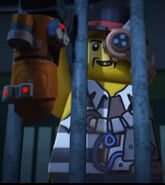 The Mechanic reading Boobytraps and How to Survive Them

The Mechanic in 'anime' style

The Mechanic using his flamethrower arm.

The Mechanic pokes himself with a pencil.

The Mechanic, Soto and Ultra Violet.

Retrieved from "https://ninjago.fandom.com/wiki/The_Mechanic?oldid=598668"
Community content is available under CC-BY-SA unless otherwise noted.