Not to be confused with The Mechanic's warehouse.

“This is my home! Well, more of an evil lair, really.”
— The Mechanic to the ninja, "The Fifth Villain"

The Fifth Villain
The headquarters[1][2] is an abandoned arcade in Ninjago City where the Mechanic resides.

Some time later, the Mechanic demands for a new robo-arm, and the unknown figure prints out new designs. After some time, the Mechanic's new arm is build and he is impressed that he can now "feel" objects. The Mechanic once again questions who the stranger is, and the monitor reveals himself as Unagami.

The ninja enter the Mechanic's headquarters after realizing that he wanted to run away into the building. While they are exploring, Jay stumbles across a game called Prime Empire and attempts to play it, but it wouldn't work. He tells the ninja that he would stay in the lobby to do more exploring while the rest of the ninja went to the other rooms.

Jay realizes that he needs a motherboard to operate the game and luckily for him, he had one that was stolen by the Mechanic. He puts it in causing a red shockwave to be felt across Ninjago City. Jay then sees the game now working and begins playing it.

Meanwhile, the ninja are exploring The Mechanic's headquarters and feel the shockwave, but thinks it's nothing. The ninja then find another office which contains weird symbols all over the room. Zane then finds a monitor which asks the ninja telling them to play the game which confuses everyone.

On the other hand, Jay is playing Prime Empire and reaches level thirteen. The arcade cabinet opens revealing white light behind it. Jay decides to enter and the door shuts behind him. That's when the ninja return to where they thought Jay was, but cannot find him.

The ninja search for Jay and use another computer to find out that Jay enter Prime Empire using the arcade cabinet he showed to the ninja.

P.I.X.A.L. and Milton Dyer were inside The Mechanic's headquarters looking for clues. They discuss Unagami and the origin of the game. When P.I.X.A.L. gets a distress signal from Wu, they head out to the Mechanic's warehouse.

The ninja sought out The Mechanic in order to switch out with him to infiltrate the Council of the Crystal King and figure out what the Vengestone is being used for. 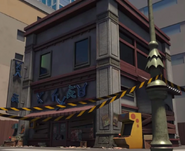