The News Never Sleeps is the sixth episode of the eleventh season, and the 104th episode overall of LEGO Ninjago. It aired on July 6, 2019 in the United States. It is paired up with the "Boobytraps and How to Survive Them."

Lil' Nelson takes a job as a paperboy, which is more difficult than it sounds in a city overrun by scorching Pyro Vipers and an evil Serpentine sorceress.

The episode begins back in Ninjago City where Lil' Nelson wakes up and gets ready for his new job as a paperboy.

When Lil' Nelson rides his bicycle to the storage room, he meets up with other kids who gossip whether he would last for the day. Before Nelson could react, the storage room opens and Sammy makes some announcements such as road closures and some paperboys being out with injuries and one quitting their job. Eventually, he introduces Nelson and pairs him with Antonia.

As Lil' Nelson and Antonia begin to deliver the news, Nelson sees fireballs coming down from the sky and Elemental Cobras emerging. At first, Nelson barely gets through the path of Elemental Cobras and struggles to keep up with Antonia who continues to deliver the newspaper to people. By the time Nelson reaches Antonia, he begins to overreact and question the situation they're in, but Antonia doesn't care and continues to do her job.

Just when Lil' Nelson and Antonia are about to turn directions, they oversee P.I.X.A.L. dressed in her Samurai X suit fighting three Elemental Cobras. The duo pass through the conflict, but before they leave, Nelson thinks they should help Samurai X; however, Antonia shows faith in Samurai X. In the end, Samurai X proved to be victorious as she was able to destroy the Elemental Cobras.

During their lunch break, Antonia talked about having to deliver the news in conditions that included the Colossus and the Sons of Garmadon's rule. When Nelson realizes his lunch was burned down, Antonia offers Nelson another sandwich and explains to Nelson that they must do their part by delivering the news.

The duo continued to do their jobs as they were able to avoid being devoured by a Elemental Cobra and a wall of fire from stopping them. Suddenly, they spot Clutch Powers falling from the sky, and Powers explains that the Ninja are in trouble and need help before passing out. Before they continue their job, Lil' Nelson believed they should tell the news to Master Wu, but Antonia thinks otherwise. However, after Nelson is able to persuade Antonia by saying "everyone has to do their part," Antonia agrees to help.

When the duo reach Route 23, they realize that part of the highway was destroyed. Before they could reconsider any other option, a Elemental Cobra was coming their way which forced Antonia to jump over the highway. At first, Lil' Nelson is scared, but is reminded of the quote, "A Ninja never quits" and is able to complete the jump.

After a long ride, the duo finally reached the Monastery of Spinjitzu and Wu comes out. Lil' Nelson explains everything Clutch Powers said and Wu promises to inform P.I.X.A.L. about the Ninjas' situation. Wu then complements Nelson on his courage to come all the way to the Monastery and compares him to Lloyd when he was younger. Nelson is happy about the comment he received as they ride back to Ninjago City. 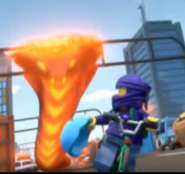 Add a photo to this gallery
Retrieved from "https://ninjago.fandom.com/wiki/The_News_Never_Sleeps?oldid=380293"
Community content is available under CC-BY-SA unless otherwise noted.