The Oni and The Dragon is the third episode of the eighth season and the 77th overall of LEGO Ninjago: Masters of Spinjitzu.

While Princess Harumi adjusts to life with the Ninja, Lloyd and Jay search for answers about the Oni Masks, and Cole and Zane attempt to infiltrate the Sons of Garmadon.

As the Destiny's Bounty lands in Hollow's Bluff, Harumi wonders if they'll be living there when Lloyd tells her it is just until they know she is safe. She asks if they have a headquarters, but Lloyd tells her it is too in the open, the Sons of Garmadon are looking for her and they need to keep moving. Lloyd guides her to the upper deck where Kai, Jay, Zane, and Nya, are with Cole, who remarks that they'll be "roomies" with the princess for a while, with her expressing her gratitude. They soon talk about the Sons of Garmadon's objective to find the Oni Masks, since they have two and the third is lost. Lloyd wants to investigate them to find out who their leader is. Jay wonders if it is someone from their past. Harumi soon finds a pair of underwear on the console before Jay swipes them up and says that they are usually more organized, but their leader is lost and the underwear is Cole's anyway. The Ninja of Earth states that they're blue and Kai quips that Harumi is lucky they're not yellow. They soon wonder about the suspect, who was arrested at the first mask's theft. P.I.X.A.L. says that he is due for release since he refuses to talk. Kai says that they will get him to talk.

Lloyd, Jay, Zane and Cole make a quick detour to Mistaké's tea shop for a tea that will loosen the suspect's lips. Upon being asked if she was around, Mistaké rudely states that she had never heard of her own name. However, upon seeing Lloyd, she apologizes because she didn't recognize his voice. Mistaké soon offers her condolences about Master Wu, remarking him as a dear friend. Cole states they haven't given up, just have urgent problems. Before Zane could ask for it, Mistaké states they seek the Tea of Truth, warning them that the truth can be dangerous. She goes to get some, telling them not touch anything and as she returns, Lloyd notices a painting. Mistaké states that it is the Oni and the Dragon, but tells him he is not ready for the tale. But Lloyd begs her and she wonders if he has time. Lloyd has Cole and Zane head to the police station while he and Jay stay to listen to the tale.

At the police station, Zane makes a cup filled with the Tea of Truth alongside a regular cup of tea and he hands them to Cole. Unfortunately, a judge recently brought in as a suspect bumps into Cole as he runs from the cops, sending the cups into the air as Zane incapacitates the attempted escapee by freezing the floor, making him slip. Cole manages to catch the cups, but forgets which is the real cup because of the incident. They soon see the suspect, identified as Luke Cunningham, also known as the Man in the White Mask. As they attempt to interrogate him, Cole drinks the tea in his right hand, which is soon revealed to be the Tea of Truth and tells Cunningham about it, before realizing his mistake. Cunningham soon asks if Cole ever urinated in a pool, which Cole confirms. Cole also accidentally reveals the location of the Destiny's Bounty, their objectives and what Lloyd's power is before Cunningham accidentally revealed their hangout spot, a bar called Laughy's.

At Mistaké's tea shop, Lloyd and Jay are given the Tea of Enlightenment to visualise the painting and learn the tale of the Oni and the Dragon. Throughout the story, Lloyd and Jay often interrupt her, but Mistaké continued. She also tells them that the Sons of Garmadon seek the three Oni Masks because they are relics of the first realm and have the power to resurrect Garmadon, but not as the man Lloyd will recognize, because he will have no light left in him.

On the Destiny's Bounty, Harumi looks sadly at pictures of her and her birth and adoptive parents, before pinning them on the bulletin board with the Ninja's photos. Nya walks in to see Harumi looking sadly at a picture of Lloyd and Garmadon. They talk about him, and Harumi remarks that she's heard stories about him. She asks Nya how he changed, and Nya explains that "Lloyd helped his father let go." Lloyd walks in a few seconds later and when asked where Zane and Cole are, says, "following a lead." He then reveals that the Sons of Garmadon want to bring back his father.

At Laughy's, Ultra Violet and Mr. E arrive. Zane, hiding behind a newspaper, tells Cole (who is hiding in a dumpster), that "two high-ranking Sons of Garmadon just arrived." Cole leaves the dumpster, only to reveal he is disguised in a white fedora with a fake mustache. Cole offers Zane a tin trash lid and a can of shaving cream for a disguise, but Zane simply "transforms" into a Son of Garmadon looking disguise. Cole dubs him "Snake Jaguar." The Ninja then strut into the bar. Two men are singing, but not very well. One Son of Garmadon asks the barkeep for another drink. The Ninja walk up and recognize him, leading to Zane saying "Dareth? What are you doing here?" Dareth turns around and recognizes Cole. Dareth explains that he bought the place as a way to get closer to when he fought side-by-side with the Ninja, but the Sons of Garmadon have moved in and he can't get them to leave. Cole explains why they are there to Dareth, and Dareth says that it's impossible. Ultra Violet has the two singers thrown out and everyone cheers. Dareth tells them about Mr. E and Zane responds in confusion. Dareth is called away by a member and Zane formulates a plan. Cole doesn't like it, but when Zane tells him to sing, he does. He gets up on the stage and everyone turns to watch. He says "Song number 159, pronto" as he tosses a coin to Zane, who puts it in a jukebox. Zane chose the wrong song, however. Instead of Creeping Death, Cole got Glow Worm. When Cole starts singing, the Sons all start to laugh, as he isn't very good.

Meanwhile, the other Ninja are watching it on a TV. Kai asks Jay if he's recording it and Jay says that he is recording it. P.I.X.A.L informs the Ninja that Zane has a plan, but they need to trust him. By now the Sons of Garmadon are beginning to get annoyed with Cole's singing and begin throwing things at him. While attempting to do a Triple Tiger Sashay, Cole slips and his mustache falls off. When he stands up, one of the Sons recognizes him. Ultra Violet orders the Sons of Garmadon to grab him and he calls to Zane for help. Zane then says to "find this Zane, and grab him too!" Mr. E and Ultra Violet drag Cole off and Jay asks why Zane isn't helping him. P.I.X.A.L says that Zane has blocked all communication. Leaving P.I.X.A.L to watch over Harumi, the Ninja jump off the Bounty into the parking lot of the Sons of Garmadon headquarters. When he tries to escape, Jay electrocutes Mr. E's bike, causing it to temporarily stop working. After he is cornered in an alley, Mr. E puts on the Oni Mask of Vengeance. He then jumps over a wall and runs into a street. He then leads the Ninja on a chase over the roofs, down another street and into an alley filled with clotheslines. After a short pause, he and the Ninja race up the clotheslines. Mr. E gets cornered by Lloyd on a rooftop, but is saved by Zane throwing Shurikens and trapping Lloyd. Jay frees Lloyd, but Lloyd recognizes the shurikens and stops the Ninja from chasing Mr. E, having realized Zane's plan. The episode ends with Ultra Violet asking Mr. E if he's bringing Zane to the "Big Man," to which he nods to. 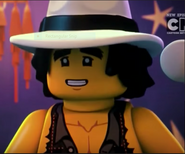 Cole in his Sons of Garmadon "Rocky Dangerbuff" disguise
Add a photo to this gallery
Retrieved from "https://ninjago.fandom.com/wiki/The_Oni_and_the_Dragon?oldid=380626"
Community content is available under CC-BY-SA unless otherwise noted.