The Visual Dictionary is a Ninjago reference book released in September 2014. It includes a minifigure of Techno Zane.

Meet the Masters of the Spinjitzu as they prepare to do battle and learn about great heroes and the ninjas' mortal enemies while discovering little-known facts about their weapons and vehicles. Discover everything there is to know about the world of LEGO® Ninjago with DK's all-new LEGO Ninjago: The Visual Dictionary.

Go behind the scenes to explore the creation and stories of LEGO Ninjago with a fantastic gallery of every Ninjago minifigure and set ever created. Read dramatic storylines from the fun LEGO Ninjago episodes and movies.

LEGO Ninjago: The Visual Dictionary wouldn't be complete without a limited-edition minifigure to add to your LEGO Ninjago sets so you can create ninja adventures of your own! 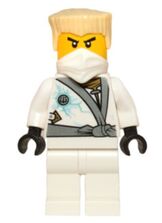 The Techno Zane minifigure included
Add a photo to this gallery

Retrieved from "https://ninjago.fandom.com/wiki/The_Visual_Dictionary?oldid=528303"
Community content is available under CC-BY-SA unless otherwise noted.