View source
“The only way to slow a djinn long enough to catch one is with the venom of a Tiger Widow. One drop is strong enough to kill a man or tire a djinn, so he don't be poofing around.”
— Soto to Lloyd, "Enkrypted"

Tiger Widows are a large species of spider and the titular inhabitants of Tiger Widow Island. The lair of the one the ninja encountered is a cave with a temple entrance.

The location of their island residence (and subsequently themselves) is on a map located in Nadakhan's lantern, aboard the Misfortune's Keep.

At one point, Captain Soto acquired the venom of a Tiger Widow and used it to exhaust Nadakhan long enough to trap him in the Teapot of Tyrahn.

While looking for the Tiger Widow, Jay encountered the spider in its lair and fought it off, electrocuting the beast. However, the Tiger Widow destroyed Cliff Gordon's Handbook to Wooing Women, but in the process Jay managed to harvest some of its venom. The Tiger Widow proceeded to chase Jay out of its lair and across the island, warding off Nadakhan. Eventually, it cornered the ninja on a rope bridge, only to be thrown off into the chasm below.

The Tiger Widow survived the fall and eventually returned to its lair, where it confronted Dogshank after the latter fell in through a portal. Approaching the Sky Pirate and screeching in her face, it was ironically scared off by a single "Boo" from her.

The Tiger Widow the ninja encountered was incredibly fast for its size, pursuing them across the jungle in pursuit of Jay. Additionally, it had enhanced endurance, being able to survive a lightning blast from Jay and a large fall into a chasm. It also weave massive webs that can support the weight of a grown man. The Tiger Widows' most infamous asset, however, are their venomーa single drop is potent enough to kill a man, and mere skin contact can induce death within minutes, even for an Elemental Master. Their venom is also perhaps the only true weapon against a djinn, being potent enough to exhaust one enormously, leaving said Djinn vulnerable to attack. Their venom also apparently inhibits a Djinn's mental functions as well, as, when under the affects of the venom, Nadakhan failed to twist around Jay's wish to his favor. 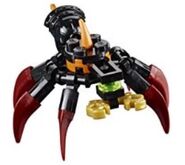 The venom of the Tiger Widow.