Start a Wiki
watch 00:18
The Loop (TV)
Do you like this video?
The Timeline of Ninjago is a chronological list of the important events that have occurred in the known history of the world of Ninjago in the LEGO Ninjago television series.

The Beginnings of the Sixteen Realms

Thousands of Years Ago

Light vs Darkness; the First Battle of Ninjago (Thousands of Years Ago)

Over a Thousand Years Ago

The Sons of the First Spinjitzu Master

The Birth of the Ninja (Less Than Two Decades Ago)

Note: There is no particular reason for the order of Kai, Jay, and Cole's births. The original ninja that are human are all simply around the same age, which of them is older or younger than the other is unknown.

Tyranny of the Shintaro Dungeons

The Realm of Shadows

Canonical order of the series' events

This is a list of all of installments that are canon to Ninjago: Masters of Spinjitzu, whether books, specials, etc.

Canon books written over the course of the series

The prophecy of the Green Ninja is written

Garmadon and Wu, Sons of the First Spinjitzu Master

Garmadon is bitten by the Devourer

Young Krux after getting out from the Temporal Vortex

The skeleton of Morro's mortal remains

Zane's first encounter with Wu, just after unknowingly receiving the element of Ice

The return of the Hypnobrai

Zane's vision of the Green Ninja

The Original Ninja in the past

The Overlord in Spirit form

The Ninja in the Temple of the Light

Cyrus Borg after the Final Battle

Overlord trapped in his digital form 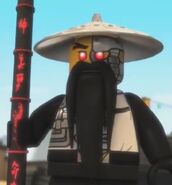 The Ninja in space

The Overlord in The Golden Master form

Zane before his "death"

Retrieved from "https://ninjago.fandom.com/wiki/Timeline_of_Ninjago?oldid=516312"
Community content is available under CC-BY-SA unless otherwise noted.