Ninjago Wiki
Register
Don't have an account?
Sign In
Advertisement
in: Ninjago, Ninjago: Masters of Spinjitzu, 2019,
and 10 more
English

Not to be confused with the set or the Ice Mech.

“The mech's processing unit is damaged. I may be able to fix it, but it requires running a diagnostic. I will attempt to connect myself to the mech's processor. As long as the cable is not disconnected, I should be okay.”
— Zane, "The Message"

Kelly Metzger
The Titan Mech was a ninja vehicle that was originally built by P.I.X.A.L., Jay, Kai, and Cole to defend Wu from the Pyro Vipers before being claimed by Lloyd. When P.I.X.A.L. used the mech against Aspheera, the mech was dismantled and was banished to the Never-Realm along with Zane. After it was banished, Zane attempted to fix the mech by running a system diagnostic but had his memories erased by Vex instead. Later on, Lloyd and Akita found the mech inside a cave and later used it to find Zane. However, on the way to the Castle of Ice, the mech was eventually destroyed again by Boreal.

Shortly after the end of the Oni's invasion, P.I.X.A.L. had been working on the hangar bay for six months. While working on the base, she began building the Titan Mech; however, she wasn't able to complete it and stored it for later.

Inside the Monastery of Spinjitzu, the Pyro Vipers were trying to break through the doors of the hangar bay by slamming Elemental Cobras into the door. Inside the base, Kai, Jay, and P.I.X.A.L. were working on the Titan Mech to fight Aspheera. When Jay turned on the mech, it was working at first before shutting down.

The Pyro Vipers destroy the door to the hangar bay, but they cannot find Wu until Jay gives away their hiding spot by sneezing. When Aspheera thought she could finally have revenge against Wu, the Titan Mech activates and defends the ninja and Wu. Despite this, Aspheera managed to overpower the mech by using rocks to bring down the mech. She then attempts to destroy the mech using her staff but P.I.X.A.L. blocks the shot with the arm of the mech causing that part to disappear.

During the epic Forbidden Spinjitzu battle, Aspheera attempts to destroy Wu by using her staff but he dodges and instead hits the Titan Mech, causing it to disappear.

In the Never-Realm, the Titan Mech is seen in the snow with footprints leading away from it.

The mech ends up in the Never-Realm, along with Zane, who tries to fix it, but was damaged himself. Zane transports the mech, while traveling the realm. After making camp in an eagle's cave, Zane recorded a message that he will run a diagnostic check on the mech. But before it could finish, Vex, who had been stalking Zane since his arrival, interrupts the process by pulling the plug connected to him, erasing his memories and the mech was left behind.

Nya detects the signal of the tracker and the ninja travel to it but were ambushed by wolves and travel to the Great Lake instead.

Nya examines the tracker and notices that the signal is faint, which makes no sense due to the age of the battery.

Nya gives Lloyd the tracker. While he travels through the Mountains, he meets a white wolf and the two decide to salvage the mech and use it to storm the Castle of Ice.

Lloyd and Red walked through a long vast area that was probably a desert, and then stumbled into an Ice bird's home, with many bones. Red eventually found a cave, and the Titan Mech was there, but he found a recording of Zane, remarking that he may be dead. Lloyd, refusing to accept his friend's potential demise, worked to fix the mech. Thanks to his power, the mech and then fought the Ice bird with it. After the battle, Red hops aboard and the two use it to continue their journey to the Castle of Ice.

Lloyd and Red are asking steady progress to the Castle, as they are attacked by an Ice Behemoth. After a brief struggle, Lloyd in the Titan Mech manages to overpower and destroy the Behemoth.

It was parked in the background while Akita told Lloyd her backstory.

Lloyd and Akita make it to the Castle, however Boreal arrives at the same time. Lloyd uses it to try and fight the ice dragon, only for the mech to be rammed into a cliff and dismantled.

Stride into the LEGO® NINJAGO® Never-Realm with Lloyd’s mighty Titan Mech and Zane FS! Face-off against General Vex’s Blizzard Samurai army. But beware—Vex has his powerful Scroll of Forbidden Spinjitzu weapon. Smash the Blizzard Samurai with the robot ninja mech's shuriken slicer and giant katana. Detach the flyer, jump into the cockpit with Lloyd and fire the spring-loaded shooters. Create a Spinjitzu tornado with Zane's ninja spinner. Together you must defeat this dangerous enemy![1] 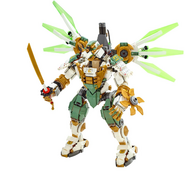 Lloyd's Titan Mech in a promotional poster for Secrets of The Forbidden Spinjitzu.