“I faced my fear. When I realized it wasn't something in front of me that held me back, but something inside me, I found a deeper power. A dragon power.”
— Zane to the Elemental Masters, "The Day of the Dragon"

Existent (when manifested)
The Titanium Dragon is Zane's Elemental Dragon that was unlocked after he accepted the truth that he was no longer the White Ninja, but the Titanium Ninja.

The Titanium Dragon was discovered by Zane after he fell into a large snowy cavern. The dragon emerged from the shadows and aggressively approached Zane, roaring at him. However, the Ninja of Ice realized that the dragon was chained, and woke up to discover it was only a dream.

In another dream, the dragon was sound asleep, and Zane seized his chance to escape from the snowy cavern. Unfortunately, he slipped and fell at the last second, and thus woke up the creature. It gave a roar of fury which woke the Nindroid, finding himself being unchained by his rescuer, Cole.

This time, the dragon appeared while Zane was wide awake while stranded in a cavern similar to his previous dreams. Traumatized by its presence, he found himself unable to fend for himself until P.I.X.A.L. reassured him of the real reality, as well as the real source of his fears. Zane learned that the dragon was symbolic of his inner fears and doubts, and once he was able to overcome those fears, he gained the ability to conjure it.

Zane later showed his friends his new ability stating to Lloyd, who, after witnessing Chen leave and saying he was the only one with a dragon, stated that he was the only one with a dragon. Zane stated that that was not true anymore, and told his friends that he faced his fears and was able to confront them to summon his dragon. Zane's words would be supported by Kai, who summoned his Dragon and told the other Masters they could do the same. The motivation caused all the Masters to do so as well and they flew after Chen's army to save Ninjago.

Zane and Dareth rode the Titanium Dragon back to Ninjago City, then to the Samurai X Cave and Kryptarium Prison. It was later used to chase down an Anacondrai truck though, upon realizing it was empty, Zane became afraid and lost control of the Titanium Dragon.

Zane used his Elemental Dragon to help the ninja capture a Fangfish that had been terrorizing a coastal village. He later used it to ride back to Wu's new tea shop, Steep Wisdom. While the ninja were showing off their powers while advertising the shop, Zane used his dragon to create a large ice sculpture of a teapot. Unfortunately, when Morro took control of Lloyd, the ninja lost their elemental abilities and their dragons. As a result of the Titanium Dragon disappearing in midair, Zane plummeted to the ground.

When the ninja left to see what Clouse is up to, the ninja rode on their Elemental Dragons. They decided to take a quick detour to the hospital to visit Lil' Nelson.

Zane rode on his Dragon to the Mountains of Impossible Height to hide from the police.

After they agreed to split up in pairs to look for Nadakhan, Zane rode his Dragon with Lloyd to the Ancient Library of Domu.

Zane mentions the dragon as an example to a skeptical Jay of how his visions usually come true. Jay acknowledged Zane's claims but believed his recent vision wouldn't come true and told him to move past it, though it later did come true. 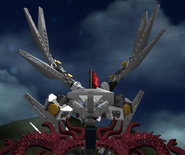