For other uses, see here.

“Maybe we should give her some time to sweat it out!”
— Tommy to Simon in "Public Enemy Number One"

Gun (in an alternate timeline)
Taser

Tommy (also known as the Bad Detective) is a detective for the Ninjago City Police. Unlike his counterpart Simon, Tommy takes a much more aggressive approach to his job.

He and Simon questioned Misako after she was arrested, though she refused to reveal where the ninja were hiding, instead insisting they were framed. Tommy decided to let her sweat it out, though when they returned, she had vanished.

Tommy was present at police headquarters when the news was broken that the ninja had escaped Kryptarium Prison. While he consumed a handful of doughnuts, Tommy revealed the computer password to another detective (who was none other than Jay in disguise).

Later when the ninja appeared during the Sky Pirates' attack on the city, the Police Commissioner sprinted after them, surprising Tommy with how nimble he was.

The detectives, Commissioner, and Ronin found Nya, Lloyd, and Cole near Tiger Widow Island. After telling them they realized the ninja are not criminals, they showed them a bottle with Jay's message inside.

Tommy helped build the Raid Zeppelin so the ninja can get close to New Djinjago.

When the trio were captured by Nadakhan, they were threatened to walk the plank. Tommy accidentally told them the ninja still have the venom and jumped off. The other two followed, and they were surrounded by sharks.

While in a cop car with Simon, the Sons of Garmadon race by on their bikes. The two cops soon give chase, but they are stopped after Zane jumps over their car with his bike.

Tommy would participate in distracting the Sons of Garmadon long enough for them to enter the Royal Palace, which was converted by the Sons of Garmadon and Harumi into the Temple of Resurrection. After the ninja prevent the ritual from being completed, Tommy and Simon both personally arrest Harumi.

Tommy is seen carrying some debris after Lord Garmadon's attack.

Tommy is seen along with Simon in the police blockade, before The Colossus stomps onto the police cars, a female officer saves him from being crushed and helps him up afterwards.

Tommy is seen in one of the crossed out photos on the floor in Garmadon Tower when the Resistance broadcasts Lloyd's message to Ninjago, indicating Tommy has been captured as part of Ultra Violet's Ultra Hunt.

The police force began to arrest the Sons of Garmadon once more.

Tommy's appearance in Sons of Garmadon and Hunted

Tommy and Simon prior to arresting Harumi 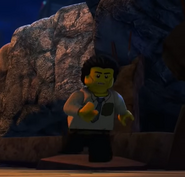