View source
watch 01:25
Jurassic World: Dominion Dominates Fandom Wikis - The Loop
Do you like this video?
Play Sound
“And if you look to your left, you'll find Ninjago's very own Torchfire Mountain, where the core of the natural volcano can reach up to three bajillion degrees!”
— A Tour Guide, The Rise of the Great Devourer

The Rise of the Great Devourer
Torchfire Mountain is an active volcano located in Ninjago's Sea of Sand. It is the only volcano in Ninjago that is capable of destroying the Fangblades.

The ninja arrived at Torchfire Mountain to destroy the Fangblades and ensure that the Great Devourer was never released from imprisonment. However, before they could throw the Fangblades into the volcano, Pythor sabotaged the ship's engines, causing it to tilt. The ninja and Wu almost fell into the volcano, but Nya caught them with her Samurai Mech. 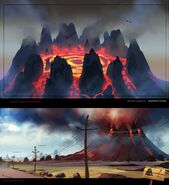