Used (requires the power of the Golden Weapons)
The Tornado of Creation is a powerful maneuver used by the First Spinjitzu Master to create Ninjago.[citation needed] It combines the individual elements into a maelstrom of pure energy that can create something out of nothing—however, the ninja use it to absorb items in their surroundings to construct new objects and weapons, such as a bone Ferris wheel, a slingshot, and the Ultra Sonic Raider. The tornado could only be used through the combined power and presence of the Golden Weapons.[1] Since the Golden Weapons lost their power during the Oni Invasion after being reforged,[2] it is currently once again impossible to create the Tornado of Creation.

Master Wu first told the ninja about the Tornado of Creation during the trip to retrieve the Shurikens of Ice. He explained that the ninja had to focus and combine their powers—if they were careless, the technique could have disastrous consequences.

While sneaking through the Underworld to rescue Master Wu and the Sword of Fire, the ninja were confronted and surrounded by an army of Skulkin and Spykor. With no other options, they took Jay's suggestion and used the Tornado of Creation for the first time, sucking in their enemies (except for one who jumped off the edge), the Skulkin's vehicles, and parts of Garmadon's Dark Fortress. When the ninja completed the technique, they discovered that they had created a massive ferris wheel, with cage-like gondolas imprisoning the Skulkin.

When the ninja were captured in the Lost City of Ouroboros, Pythor forced them to fight Samurai X in a Slither Pit. Outgunned by the enigmatic warrior, the ninja used the Tornado of Creation, building a gigantic slingshot they used to damage the Samurai Mech.

After narrowly escaping being consumed by the Great Devourer, the ninja fled to Ed & Edna's Scrap N Junk to formulate a new plan. Using a set of blueprints and the massive amount of scrap lying around, they used the Tornado of Creation to build a vehicle to fight the Devourer: the Ultra Sonic Raider.

After Lord Garmadon took the Golden Weapons and they were blasted into space,[3] the weapons were obtained and melted into the Golden Armor.[4] With the weapons destroyed, it was no longer possible to summon the Tornado of Creation.

In order to combat the Digital Overlord from taking over Zane, the ninja remembered the Tornado of Creation and Nya downloaded it into Zane's system, but it did not have an effect on the Overlord virus.

After failing to defeat the Oni and when Kai reforges the weapons, Lloyd has an idea to use The Tornado of Creation, with the help of Wu, Garmadon, and the rest of the ninja, to wipe the Oni out. After the tornado is formed, a wave of Golden Power spreads throughout the Sixteen Realms saving everyone who had been petrified. After it was used, Lloyd is knocked unconscious and sees a vision of the First Spinjitzu Master.

The Tornado of Creation used in the Underworld.

Tornado against Samurai X during "The Snake King" 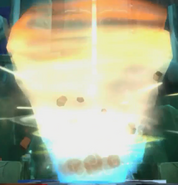 Using it against Ronin

The Tornado of Creation as shown in March of the Oni, now powered up with Lloyd, Nya, Wu, and Garmadon inside.

The Tornado of Creation on the Season 10 opening.

The Tornado of Creation in the pilot episodes mural.
Add a photo to this gallery

Retrieved from "https://ninjago.fandom.com/wiki/Tornado_of_Creation?oldid=619739"
Community content is available under CC-BY-SA unless otherwise noted.