View source
watch 01:25
Jurassic World: Dominion Dominates Fandom Wikis - The Loop
Do you like this video?
Play Sound
“What we need is an army.”
— Tox to the Resistance in "Iron & Stone"

Ian James Corlett (Season 4)
Maggie Blue O'Hara (Season 9)
Tox is the current Elemental Master of Poison and was a competitor in Master Chen's Tournament of Elements alongside the other Elemental Masters of her generation. In the second round of the event, Tox fought against Shade, who used his element of Shadow to defeat her. Afterward, she was ridden of her powers and forced to work in Chen's noodle factory. Tox and the other Elemental Masters who were imprisoned there escaped and joined forces to fight Chen's army, who transformed into Anacondrai.

Tox and her allies rallied the people of Ninjago to fight Chen's followers at the Corridor of Elders. Despite their best efforts, they were overpowered until Garmadon sacrificed himself to the Cursed Realm to curse Chen's army.

Months later, Nadakhan imprisoned Tox in the Djinn Blade, though after Jay made his final wish, these events were erased and Tox was freed.

After the supposed demise of the original ninja, Lloyd recruited Tox and many others into a new team in a bid to resist a resurrected Garmadon's oppressive rule.

Tox was born as the daughter of the previous Elemental Master of Poison. At some point, she unlocked her True Potential.[1]

Tox was one of those invited to participate in the Tournament of Elements. She accepted and met the other Elemental Masters on the New Ninjago City pier at midnight where they were picked up by Clouse to be taken to Chen's Island.

Once on the Island, Tox was present at Chen's opening ceremony and was then escorted to her suite by the Kabuki. Once the first challenge began, she fought the other Masters for a Jadeblade. She was able to find one, thus securing her place in the next round of the Tournament.

The next morning, Tox ate breakfast in the Chow House with Ash and Neuro, then later observed the three battles that took place throughout the day. She was present near the bracket board when Jay and Cole discovered they had to fight each other, and she witnessed that fight as well.

The next day, Tox observed Skylor defeat Jacob, though soon became outraged at the ninja when she learned that because of Jay and Cole's ignorance, all of the Masters would be forced to sleep in the Chow House instead of their fancy rooms.

In the middle of the night, Tox and the other Masters were woken by Clouse and given skates. They were taken to the royal arena for the thunderblade event, and Chen explained that the other Masters could help or hurt either of the two fighters—Lloyd and Chamille. Still angered about losing her room and treasure, Tox quickly sided with Chamille and the other Masters. At one point during the event, Tox created a poison cloud on the track to stop Lloyd, though the Green Ninja was able to skate around it and Kai ended up being its victim instead. Jay would later get back at the Master of Poison by pushing her off the track.

Later in the match, several of the Masters joined Lloyd's side after they learn Chen's spell, but Tox was shoved out of the way by Neuro while the ninja explained, and thus continued to try and stop Lloyd. Her attempts were thwarted by Turner, and when Chamille was eliminated for losing, Tox did not join in the other Masters' celebration.

For the final fight of the first round, Tox competed against Shade and lost. She was stripped of her elemental power and taken to work in the noodle factory.

After the Factory was put on lockdown, Tox and the other imprisoned Masters gathered beside Cole as Zane explained their proposed escape plan. After agreeing to build a Roto Jet, she went to look for machine parts.

After Dareth was sent to the noodle factory, thus ruining their plan to escape via the sewer network, Tox suggested that they fight their way out but her idea was quickly overruled.

After Zugu discovered the Roto Jet, Tox and the other Elemental Masters rushed over to help push it out of the Factory as it was yet unable to fly. They steered the flightless aircraft to the prison cell where they freed Nya and Garmadon before continuing on to the Anacondrai Temple. There, they confronted Chen's army and their powers were soon restored as Kai destroyed the Staff of Elements.

Later, after the Masters secured the Island, Tox laughed with the ninja as Zane activated his humor switch showing all past rivalries gone.

When the Anacondrai warriors were transformed into Anacondrai, Tox used her poison cloud in an attempt to stop them, but eventually was forced to retreat into the palace. She managed to unlock her Elemental Dragon soon after to fly back to New Ninjago City.

Tox used her Elemental Poison Dragon to fly back to Ninjago where they found that Chen hadn't invaded. At Lloyd's order, she watched over the city with the other Masters.

When twenty noodle trucks began heading out, Tox and her allies prepare to engage them only to find the trucks heading in various directions to presumably attack the villages, Tox pursued one of them only to find it empty. Like many others, she lost control of her dragon out of fear which was part of Chen's plan to invade without a problem.

After receiving a message from Neuro, Tox met up with the other Masters in the Samurai X Cave. There, they decided to make their stand against Chen's army in the Corridor of Elders.

During the ensuing battle, Tox fought bravely against the imposter Anacondrai, before watching them being banished to the Cursed Realm by the spirits of the Anacondrai generals and celebrated with the other Masters when victory was achieved before returning to her home.

At one point, Nadakhan imprisoned Tox in the Djinn Blade with the other Elemental Masters.[2]

When the Resistance returned to the garbage depot, Tox said they need an army, but Skylor tried to calm her by telling her they can build whatever they need.

Tox was with the others in the Resistance at the garbage depot.

When the Sons of Garmadon attacked the garbage depot, the Resistance fought them. They were eventually taken to Kryptarium Prison.

Tox was captured by the Sons of Garmadon and was placed inside Kryptarium Prison.

While in her cell, Tox overhears the guards saying the ninja have returned, which she's happy to hear. After Griffin Turner opens the cell, Tox breaks free from her cell along with the other inmates and form a riot against the guards, before they escape the prison and head for the city.

Tox makes it back to Ninjago City, where she helped bring down the Colossus along with the people of Ninjago.

When the ninja celebrate for their victory, Tox can be seen in the audience cheering on her allies.

If there is anyone who wants to poison the competition, it is Tox. This female fighter has the type of venom that can leave a lasting impression. Be careful not to get touched by this one, because she will make you feel really bad.[3]

With wild green hair and a wicked grin, Tox, the Master of Poison, looks like someone you don't wanna mess with. The ninja were glad she decided to side with them against Chen and later, the Sons of Garmadon.[4]

Tox in the Tournament of Elements Ninjago history mural

Tox with the other Elemental Masters

Tox in the Thunderblade competition

Tox and the other prisoners planning their escape

Tox and the other Elemental Masters cheering

Using her powers against the transformed Anacondrai warrior

With Mr. Pale and Karlof, fighting at the Battle of the Corridor of Elders 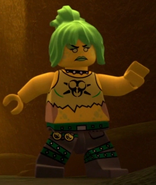 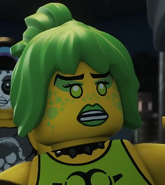 "Did you see the size of that thing? We're like ants."

Eating cake with the others. 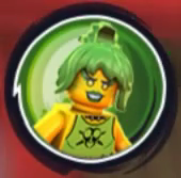