2016
Trading Card Game is a card game that was launched in 2016. There are currently cards from Skybound to Seabound and Ninjago: Core. 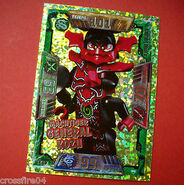