The Training Dummy is a minifigure that appears in a few of the 2011 Ninjago sets. It appears as a tan skeleton with a featureless cylinder replacing its head. Unlike the Skulkin, its arms hang limply, due to the smaller pins that attach them to the torso. As the name suggests, the Training Dummy is used by the Ninja in training, allowing them to practice their combat moves without risking injury.

Although the Training Dummy is exclusive to LEGO sets, several similar objects appear in LEGO Ninjago: Masters of Spinjitzu: 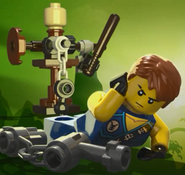 The Ninja practicing on Serpentine dummies at night.

A group of them.
Add a photo to this gallery
Retrieved from "https://ninjago.fandom.com/wiki/Training_Dummy?oldid=350656"
Community content is available under CC-BY-SA unless otherwise noted.