View source
“I was attacked by Treehorns on a walk through Birchwood Forest! So those lanky leaf-lovers felt the full force of my enchanted lichen!”
— Fungus, Yikes!

Alive
Treehorns are large, four-legged creatures that live in the Birchwood Forest and are led by the Treehorn queen. They have large red eyes and pale blue skin dotted with irregular black patches—the latter forms a pattern reminiscent of a birch tree's bark. Overall, a Treehorn's long neck, large mandibles, and unnaturally long, thin legs make it appear as a cross between an insect and a deer.

Treehorns stalk their habitat in near-silence, their long legs nearly indistinguishable from the birch trees around them. When prey is spotted, they surround it and attack with their legs, kicking their prey around and stomping them when they fall. Although their height makes them somewhat unsteady and easy to knock down, they display high durability and surprising speed.

As part of their father's training, Wu and Garmadon traveled to the Birchwood Forest, where they participated in "Cross-country racing with Treehorns".[1]

The Tall Tale of Flintlocke (non-canon)

When Flintlocke was transported to the arctic by Nadakhan thanks to his second wish, the Treehorn queen attacked him, chasing the pirate across the falling, icy stalactites. However, he escaped her when he wished to be on a pirate ship, transporting Flintlocke to the Misfortune's Keep.

After Zane and the other ninja learned of the former's true nature (a Nindroid built by Dr. Julien) they were encountered by several Treehorns. Previously, the beasts had been held at bay by the Juggernaut, but its deactivation at Zane's hands allowed a whole group of Treehorns to attack the hidden workshop. They nearly defeated Kai, Jay, and Cole, but Zane arrived and fought them off. After their queen was defeated by Zane unlocking his True Potential, the other Treehorns fled.

Zane encounters several Treehorns as he raced through the forest to the Ice Temple. 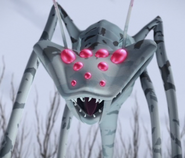 A Treehorn behind Jay