View source
watch 01:25
Jurassic World: Dominion Dominates Fandom Wikis - The Loop
Do you like this video?
Play Sound
“It's never too late to conquer your fears, especially to rescue a friend!”
— Twitchy Tim, "The Tooth of Wojira"

Ninjago
Island of the Keepers (formerly)

Brian Drummond
Timothy Batterson, more commonly known as Twitchy Tim or simply Twitchy, is a food and gas seller who went alongside the ninja on an expedition to the Island of the Keepers.

At some point, Twitchy was on a balloon tour when his hot air balloon was blown off-course to the Island of the Keepers. Scared off the island from the storms, monsters, and "doom," he was struck twelve times by lightning while trying to escape. This caused an adverse effect of anterograde amnesia.[1] Eventually, he managed to escape by using a raft after being trapped on the island for a year.[2]

Twitchy was seen on the news while P.I.X.A.L. told the ninja about him. Later, he was met by the ninja in his gas station, when he was sleeping. He was asked about the uncharted island that he once escaped from, to which he replied in fear before his memory was lost. After a bit, he decided to join the ninja on an expedition to the uncharted island. He rode with the ninja to the island.

Twitchy got scared immediately when Zippy appeared and assumed survival positions. After a bit, the Stone Guardians attacked, and he ran off to a cave. Lloyd fortunately arrived at the same cave, where they met.

Twitchy Tim warned Lloyd not to go out of the cave, before suffering short-term memory loss and repeating it again. He was then told by Lloyd that he could do brave things as well.

Motivated by Lloyd's words, Twitchy Tim regains his bravery and decides to help the ninja. He boarded one of the battle catamarans and proceeded to harness the power of the storm to speed up the boat, making it crash into Ronin's monster and making it sink.

Twitchy was present at Nya's memorial.

The ninja arrive at Twitchy Tim's gas station for the whereabouts of the Island of the Keepers. They are surprised when Twitchy Tim's memory quickly fades away a few times, but still joins the ninja nonetheless despite is experiences on the Island. Later on, Lloyd's words managed to motivate Twitchy Tim and regain confidence to stop Ronin's actions. Afterwards, Nya picks him up from the water, commending him for his bravery. Twitchy Tim was one of the many ninja allies who attended Nya's memorial, showing how much he values the ninja as allies too.

Not much interaction has been shown between the two, but Twitchy Tim used a battle catamaran to crash into Ronin's monster and foiling the cunning thief's plans. 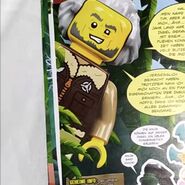 Eagle logo on Twitchy Tim's back

In The Island's intro