After Prime Empire was created

Unagami's Army were those who follow the commands of Prime Empire's former ruler.

The Mechanic calls their recent robbery a success and the monitor said that the bank robbery was a test subject for a greater plan. The Mechanic asks for the monitor's name, but the monitor says that he'll know all when the is right and turns itself off.

The Mechanic demands for a new arm, so the monitor prints out instructions. The Mechanic repairs and replaces his new robo arm and likes it. The monitor then reveals to be Unagami.

Jay is interviewed about the Speedway Five-Billion which is cut short when the Red Visors being chasing him.

After Scott escapes, the Red Visors chases him until Jay used his kusarigama to drift Scott's car, allowing them to escape and the Red Visors to crash into a building. However, another Red Visor appears and crashes into the Ninja Tuner Car.

After Jay and Scott were able to escape, both of them went to an invisible garage while the Red Visors decided to report to Unagami after their defeat.

The Mechanic and his crew are able to steal a motherboard, but the Ninja catches them. They begin to fight until The Mechanic takes the motherboard and escapes using his Noodle Truck. Fortunately, he is captured by the Ninja.

The Mechanic refused to answer any questions from the Ninja, so he is taken to Kryptarium Prison.

Unagami's allies, the Kryptarium Prison inmates, attacked Borg Tower to retrieve the original Arcade Cabinet. During the attack, the Mechanic tells Lloyd that Unagami plans to start a new revolution and that he will be serving by his side. After the Ninja entered Prime Empire, the Mechanic attempted to reactivate the Arcade Cabinet. However, the Arcade Pod wouldn't turn on, as Zane took the Prime Empire Motherboard with him when he escaped with P.I.X.A.L. and Cyrus Borg.

The Aerial Drones take up the Energy Cubes any time they lost all of their lives.

When Ritchie was questioned by Lloyd, he replies that he was ordered by Unagami to attack the Ninja. Moments later, Ritchie tells Lloyd that he can help the Ninja by showing them a shortcut, a glitch.

After one of Unagami's Aerial Drones spotted the Ninja, it summons a group of Red Visors, and the Red Visors and the drone attacked the Ninja at the Cliffs of Hysteria.

During the attack, Kai took control of the Drone and defeated the Red Visors with it. The Ninja and Okino then took one of the Red Visors and learned that Unagami is planning to construct a machine that would allow him to enter Ninjago.

While the Ninja and Okino are in the Maze of the Red Dragon, Unagami pauses the game to speaks with Okino. He tells his "son" the Ninja are correct that's he's living in a virtual world, and plans to build a gateway to the "real world". He promises Okino to take him but forces Okino to ditch the Ninja by not helping them, describing the Ninja as enemies to his plot. Okino is hesitant at first, so Unagami transforms into the Empire Dragon and threatens Okino, or else he wouldn't bring him along.

Later, Unagami interrupts the game again just before Okino is about to give advice on how to defeat the Red Dragon. He threatens Okino with the same message before leaving again.

Okino doesn't follow Unagami's order and the Ninja defeat the Red Dragon and obtain the Purple Key-Tana. Once again, Unagami pauses the game telling Okino the gateway will finish and he will not bring Okino with him.

The Red Visors surround the Ninja after they were trying to enter the Speedway Five-Billion. The Ninja are able to defeat them, but Jay uses his credits to get a weapon upgrade, causing them to need more credits.

Later, the Red Visors enter the Dance Room and encounter the Ninja. Kai, Cole, and Lloyd fight in the background and some Red Visors even enter the dance floor to interfere with Nya and Jay. While they are fighting, Cole does the Triple Tiger Sashay to take out three Red Visors.

Just after the Ninja leave, the Red Visors report that the Ninja were able to enter the race. Unagami then commands them to find Scott believing he can lend them cars for the race.

When a Red Visor noticed Lloyd wearing a disguise, a group of them chase after Lloyd. However, Lloyd was able to escape by jumping onto a Quad Bike.

Red 29 is spying on Scott's Garage and sees Racer Seven enter the garage along with Scott and the Ninja. He then orders for more Red Visors to back him up.

The Red Visors enter the race to chase after the Ninja. They surround Nya's vehicle and are about to crush it, but Nya intentionally slows down, causing the Red Visors' cars to crash. She then accelerates and knocks one off the tracks.

During the race, Ritchie, Richie, and another Whack Rat surrounded Nya the same way the Red Visors did before but only for one of them to throw a torpedo at Nya's engine. However, Racer Seven was able to put it out.

After Kai and Cole sacrificed themselves, Ritchie and Richie attempt to stop Racer Seven from crossing the finish line. However, they both failed when the remaining Ninja collided their vehicles with them.

When the Ninja and Racer Seven win the Speedway Five-Billion, the Red Visors attempt to stop the Ninja from leaving, so Racer Seven steps in their way telling them that they are coming for Unagami.

After Lloyd, Jay, and Nya arrived in a Battle Arena at Terra Domina, Lloyd was forced to battle an Avatar of Harumi. However, after Lloyd found out that the Avatar wasn't the actual Harumi, Lloyd was able to defeat her but was cubed as a result.

The Mechanic and his henchmen ambush Zane and P.I.X.A.L. while they are exploring Buddy's Pizza. They are able to electrocute both and capture Zane while they leave P.I.X.A.L. behind.

After the Mechanic's Henchmen captured Zane, they head out to the Hanger Bay and capture Wu. Meanwhile, The Mechanic's Henchmen begin building the Manifestation Gate in order to bring Unagami to Ninjago. The Mechanic then demands for the Prime Empire Motherboard, but Zane claims it was destroyed. Knowing Zane is lying, The Mechanic brings in Wu and threatens to hurt Wu if Zane doesn't confess. Zane ends up revealing the motherboard, and The Mechanic inserts it into the gate. He then uses Zane to power the gateway although it had a high chance of destroying him.

When P.I.X.A.L. is fighting the Mechanic's Henchmen, the gateway is opened and The Mechanic waits for his master to arrive while everyone else is fleeing.

When Jay and Nya enter Sushimi's Sushi Restaurant, they are attacked by a Sushi Waitress, Sushimi's Sushi Chefs, Monster Sushi, and Sushimi himself. The Ninja are able to defeat them all and move on.

Later, when Jay and Nya are hugging after reaching the Fire Wall, Sushimi arrives and throws his pufferfish at him, but only for Nya to save him and hitting her instead, turning her into an Energy Cube. Jay then grabs the pufferfish and threw it at Sushimi, destroying him.

Jay finally confronts Unagami who is after Milton Dyer. He then uses Nya's Energy Cube to complete the Manifestation Gate causing all of the Red Visors and Aerial Drones to appear and crossover. Jay fights Unagami, but he transform into the Empire Dragon and rides off.

While some of the Red Visors use the gate to crossover, others attack Jay. They are able to overwhelm him, but Jay calls for the Cyber Dragon which he uses to defeat the Red Visors and enter Ninjago.

Having gotten the Manifestation Gate function, while using Zane as a power source, Unagami led his army within Prime Empire into Ninjago.

They attacked the citizens of Ninjago City but some of them were held back by Zane, P.I.X.A.L., Wu, and Okino. After Unagami was talked into reconciling with Milton Dyer, he ceased his attack while freeing his army and the other individuals in the game. However, it was shown that Ritchie, Richie, and the remaining of the Red Visors prefer the game world. 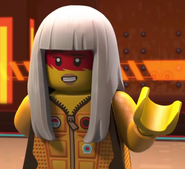 Sushi Chefs
Add a photo to this gallery 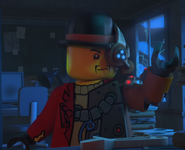 Ritchie
Add a photo to this gallery