Into the Dark
71722 Skull Sorcerer's Dungeons

Queen Vania is the queen of Shintaro who allied with the ninja against the Skull Sorcerer.

Years before meeting the ninja, Vania befriended a Geckle who she called "Mr. Sparkles". However, all the adults, including Vangelis, insisted that the Geckle was just part of her imagination.[1]

Vania arrives at the Throne Room to greet the ninja and she takes a special interest in Cole. She started getting close to Cole as they leave the Throne Room, causing Lloyd to get very suspicious of Vania.

During the night, Cole walks back to his room and hears and sound. He's able to hide and catches what he thinks is a purple monster, but it turns out to be Vania. She then tells Cole about Mr. Sparkles as she shows him to the entrance of a mine.

Along the way, they talk about the creator of the Dungeons of Shintaro, an evil wizard named Hazza D'ur, before stumbling upon an underground mining operation. Vania catches the purple monsters, green creatures, and Minos mining Vengestone and is heartbroken to see them enslaved. After seeing them be punished by the Skull Sorcerer, Cole tells Vania to head back to the palace to warn her father while he would take care of the wizard.

Vania arrives back and warns the ninja and Wu about what she just witnessed.

Inside the Throne Room, her father is very disappointed in her decision to venture into the mine. Despite King Vangelis telling the ninja to not go into the Mines of Shintaro, Vania gives them torches and shows them.

Vania and Wu use cardboard cuts of the ninja to show the Winged Guards of Shintaro that the ninja are inside the kingdom although that's not the case. Vania hopes the ninja are fine, and Wu believes they will save Cole.

Vania and Chompy save Cole when he was attacked by a gigantic spider. What Vania doesn't realize is that Chompy grew is size to scare off the spider.

They make it back to the surface to warn Wu who criticizes her for not following her word. She apologizes for her actions, and they head to the Throne Room to warn Vangelis.

They tell Vangelis about everything they saw, and he is disappointed in Vania for going into the tunnels despite telling her earlier to not do so. Cole talks about the Skull Sorcerer and the Skull of Hazza D'ur, so Vangelis reveals the skull and transforms into the Skull Sorcerer. Vania is shocked that her father would do such terrible things such as enslaving the Munce and Geckles. When Cole and Wu fall due to a trap door, Vania attempts to go after them, but her father threatens her saying if she were to rescue the ninja, she would no longer be Vangelis' daughter. Vania still jumps.

While falling down, Vania found Cole and Master Wu. Trying to help them, Vania tells Wu to slow down his falling he has to flap his hands. It would soon be proved as useless to do. Vania then tries to get into range with Cole and Wu. Cole asks if the wings Vania using will hold all three of them, Vania says it won't hold on, but it is their only chance. When Cole and Wu grab onto Vania, Vania's wings would break due to the weight of all three of them. Vania asks what to do they do, Wu says that she is handling the situation efficiently. Vania would say Cole and Wu have been in worse situations than the situation they are now, which Cole and Wu disagreed to it. Vania asks if any of them have a plan, to which Wu and Cole deny it. Vania screams, then they all fall onto a sticky spiderweb.

After Cole and Wu tried to get out of the sticky webs, Vania tells them to calm down and think. After taking a deep breath she tells them about reading a book made by Clutch Powers, saying the key to staying calm is to do vocal exercises. Vania would see a gigantic spider and then scream. When the gigantic spider got close, the trio all scream. Cole would be taken by the spider and get covers by spiderwebs, Vania tells Cole, who is panicking, to remain calm. Cole asks what is happening, which Vania says that two spiders are fighting to take possession of him. Vania added that they have large fangs and look to be very famished.

After the spiders drop Cole and fought each other instead, Vania tells him that the good news is that they drop him and fought each other. A third spider shows up and Vania tells Cole a third spider enters the area and even more famished than the other two spiders. Cole asks what is going on, which Vania answer the spider will eat him alive. Cole tells her to do something. Vania replies that she is doing something, meanwhile, she grabs a leg bone and throws it to the spider who has possession of Cole. The spider turns his attention to Vania and Wu, Vania manage to free herself and throws another leg bone. She quickly grabbed a naginata and a shield, Vania throws the Naginata at the spider but it was ineffective. She throws her shield at the spider but it was ineffective as well. Vania climbs up a ledge and jumps onto a spider and kicks a Naginata to Wu. wu grabs the Naginata and frees Cole. Vania asks what do they do, which Wu said he's thinking. The three spiders come and encircle the trio. Cole develops an idea of cutting the webs below the trio and fall down again. The trio cuts open the webs and fall down again.

Vania admitted that she is worried about the landing instead of the falling. The trio landed on a slope and started sliding. Wu tells Cole and Vania to take his hand, however, they became separated. They reunited and landed onto some water. Wu tells Cole and Vania to hold on to some rocks and they did. However, they would lose control and continue drifting. They tried again with another rock, which they got on top of it. It would turn out it was a stone turtle, the trio would jump off the tortoise and drift again. They would land into a whirlpool and spin around. After Cole made stop the whirlpool with a stalactite, Vania gets into. Cole would break the stalactite and the trio fall into a small lake. Vania and Wu passed out, however, Cole got them into some land.

Vania meets up with Cole after the Earth Ninja finally wakes up. She then listens to the Lowly's story narrated by Korgran.

Cole leads the Lowly as well as Vania and Wu to try and find a way out, but he is unable to. Plundar begins to complain about Cole's leadership; however, Vania points out that Cole is a good leader and is trying to help.

After Cole discovers a way out, everyone follows Cole's lead as swim their way out of Rock-Bottom. While swimming, Vania gets scared of a skeleton, but Cole helps her stay calm.

The group reaches a lava field and they begin to cross it using the provided rocks. Nevertheless, they encounter the Lava Monster who stands in their way. Vania points out all of the fire balls the Lava Monster is spewing which allows Wu to defend the group. Eventually, they are able to defeat the Lava Monster and safely reach the other side.

Vania and the rest of the group are chased by the Lava Monster. They find some mine carts and decide to ride it. After it's all over, they find themselves at the Heart of the Mountain. Vania explores the ancient temple and discover that Cole's mother performed the Spinjitzu Burst. She watches Cole try to perform it, but he fails at it multiple times. Cole tries to get aid from Wu, but his master is blunt and doesn't offer good advice. Vania criticizes Wu for not trying hard enough to help his student which makes Wu reflect on himself.

Vania watched as Cole battled the Dire Bats as well as the Lava Monster. She then instructed Cole to stop the mine carts as they were veering into the lava.

After making it to the surface, Vania was horrified to see Chompy locked up in a cage. With the help of Cole, Chompy is freed. The group is then stopped by the Winged Guards of Shintaro who call Cole a traitor. The two groups then proceed to fight.

While the Winged Guards of Shintaro were attacking Vania and the others, she was pleasantly surprised to see Chompy grow into a larger size. She ushered Cole and the others to run while she held off the guards. Vania tried to convince Hailmar that Vangelis was lying to him, but Hailmar charged at her.

Vania was able to get Hailmar and the Winged Guards to ally with her and Wu before they storm the caves and help drive back the Awakened Warriors with Vania helping protect Gleck. Once Cole had destroyed the skull, Vania and Hailmar quickly caught him before he could collapse. When Vangelis tries to explain his actions, Vania simply tells Hailmar to get him out of her sight. Sometime later, a ceremony was brought on to christen Vania as queen. Afterward, when the ninja are about to leave for another adventure, she bid Cole farewell with them promising to help each other in the future. Vania also accepted Lloyd's apology for distrusting her when they first met.

As the daughter of King Vangelis, Princess Vania is the rightful heir to Shintaro. She's a huge fan of the ninja and is truly honored when they accept her invitation to her birthday party. She loves books, is strong-willed, stubborn, and has a tendency not to do what her father says. Little does she know that she will soon become part of the ninja's action-packed new adventures in the Dungeons of Shintaro.

Princess Vania often disagrees with her father King Vangelis, but she is still surprised to find out he is the Skull Sorcerer! She is even more shocked when Vangelis banishes her to the Vengestone mine. Vania teams up with the ninja and helps them bring about a brighter, fairer future for Shintaro.

Vania has white skin and mainly wears a white dress with lines of light blue across the apparel. In addition, she has long amber-colored hair which she usually wears tied up in a braided bun with another braid laid down on the top of her head. On her coronation, she gains a white robe and a large gold, white, and turquoise crown with a blue gem in the middle and turquoise tassels, along with gold shoulder pads that form a large white and gold collar around her neck and a pair of Shintaro Wings on her back.

Vania displays solid fighting skills with her main weapon being a Naginata. Although she can fight, she mainly goes into battle alongside her allies or Chompy.

Vania's minifigure
Add a photo to this gallery 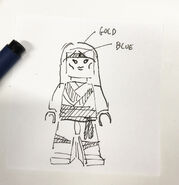 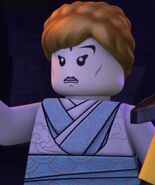 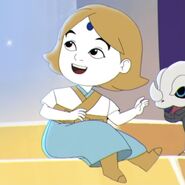 Queen
Add a photo to this gallery

As a child in 2D animation

Retrieved from "https://ninjago.fandom.com/wiki/Vania?oldid=626583"
Community content is available under CC-BY-SA unless otherwise noted.