“Vengestone's only practical purpose is to negate Elemental Power.”
“Exactly. Anyone who's collecting Vengestone has to be up to no good!”

All of Nothing
70652 Stormbringer

The Council of the Crystal King
71775 Nya's Samurai X MECH

Intact
Vengestone is a mysterious substance that can disable Elemental Powers, making an effective containment measure against Elemental Masters, ghosts, and dragons.

At some point in time, Vengestone came into existence, having the ability to cancel out the powers of an Elemental Master, as well as ghosts. It seems to originate from the Realm of Oni and Dragons as the Dragon Hunters use it to hunt the dragons.

After loading up the defeated Elemental Masters, minus Lloyd, Chen threw them in a cage made of Vengestone to prevent their escape.

After their capture, each Elemental Masters were placed in chains made of Vengestone as Chen used his Staff of Elements to steal their powers. Later on, after easily defeating Lloyd, Chen had the Green Ninja placed in Vengestone chains before stealing his elemental power.

Very soon, Kai stole Chen's staff and destroyed the chains, binding Lloyd with the powers of the staff.

Kapau and Chope used a net made of Vengestone to trap Kai and Skylor. They would then be brought to the Crystal Caves on the island, where the ritual to become Anacondrai would commence.

Ronin attempted to trap the ninja in a net made of Vengestone but fails.

While pursuing Jay on the roller coaster, Ronin attempted to capture him by using a Vengestone net but missed.

After Lloyd tries to break the handcuffs, Noble mentions that they are made of Vengestone and can also stop Cole's ghost abilities.

In order to prevent Jay from escaping, the Sky Pirates use a ball and chain made of Vengestone.

After Lloyd and Cole were both trapped with a Vengestone ball and chain as well, Cole used his first wish from Nadakhan to make Vengestone strengthen their powers instead of canceling them. This worked, but the Vengestone restraints caused their powers to grow too much and become uncontrollable. Lloyd countered this by breaking their chains, freeing them.

The Dragon Hunters used Vengestone to capture Zane, Jay, and Kai. The trio are placed in shackles that appear to be Vengestone as they are brought into Dead's End blindfolded.

The shackles the Dragon Hunters use on the ninja seem to be Vengestone and since the ninja are thought to be Oni, it can be assumed that Vengestone works on Oni as well.

The Dragon Hunters attempted to use Vengestone chains to capture Cole, Jay, and Kai but ultimately failed. However, Heavy Metal was able to capture the ninja using the chains.

When Zane was captured by The Mechanic and his henchmen, he was wrapped around by Vengestone chains.

Geckles and Munce are shown mining Vengestone deep within the Dungeons of Shintaro.

The Ninja are seen mining and realise that they are mining Vengestone, leading them to understand why their powers aren't working. Geckles and Munce can also be seen mining for it.

Zane's Mino was shown wearing armor made of Vengestone.

Cole, Lloyd, Nya, and Zane were trapped in a Vengestone cage.

The ninja fought in the Mines of Shintaro which contained Vengestone.

Vengestone looks like regular stone, except it has marks around it with a yellow or orange glow. From Season 1: Rise of the Snakes to Season 7: The Hands of Time, Vengestone did not have yellow glows around it, making it harder to recognize. From Season 8: Sons of Garmadon to Season 10: March of the Oni the glows were orange and since Season 12: Prime Empire, the markings are finally yellow. 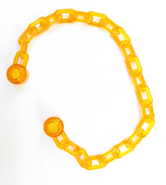 The ninja inside a Vengestone cage

Elemental Masters chained in the Vengestone

Kai and Skylor trapped in a Vengestone net

Ronin attempting to trap the ninja

Cole inside a Vengestone prison