Ninjago Wiki
Register
Don't have an account?
Sign In
Advertisement
in: The Hands of Time, 2017, 2017 characters,
and 12 more
English

Unknown
Vermin is a Vermillion soldier. In the show, many Vermillion look identical to him.

Vermin is hatched from eggs of the Great Devourer, like all the other Vermillion warriors.

Vermin went to the Samurai X Cave to take apart Zane for his metal. Afterward, the Vermillion Army traveled in underground tunnels to their new headquarters. They also attacked the power source to cause a blackout.

The Vermillion steal metal from the amusement park and junkyard. They left for the Sea of Sand to retrieve the Slow-Mo Time Blade, but kidnapped Edna, thinking she may be a builder.

They succeeded in retrieving the Time Blade, but Jay came to rescue the ninja and his mom and the commanders slowed them down. Once freed, the ninja used the Time Blade to slow the Vermillion down, and the ninja got away.

Vermin is part of the Vermillion Army that attacks the Temple of Airjitzu to retrieve the two Time Blades.

Vermin was on the lookout for the ninja but didn't realize Jay and Cole passed them. Later, they heard a loud sound and went in to check. They were able to outnumber Jay and Cole but when Lloyd and Zane helped, the Vermillion were defeated.

Vermin traveled aboard the Iron Doom back in time to fight the Elemental Alliance. During the fight, Krux and Acronix betray Raggmunk, Blunck, and Machia, destroying them and taking the former pairs control helmets. They then used them to destroy the entire Vermillion Army. The snakes that made the warriors then fused with Iron Doom, including Vermin. 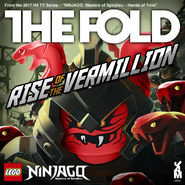 "Rise of the Vermillion" album cover