Vex's Crystal is a corrupted shard of ice used by General Vex to spy on the Ninja.

Vex uses the crystal to watch Kai in disbelief as he relights the fire.

After spying on Lloyd using his crystal, he then notifies a prisoner that Lloyd's coming, shocking the prisoner, who is soon offered a deal by Vex to join the Blizzard Samurai in exchange for Lloyd's safety. The prisoner immediately rejects the offer by throwing his recently acquired food at Vex, who laments his stubbornness.

Grimfax and the rest of the Blizzard Samurai head to the Ice Emperor's Throne to comment on their victory despite losing multiple members. Although they lost, he talks about putting out their Hearth Fire. Vex then shows Grimfax the Hearth Fire relit which leaves Grimfax shocked.

Vex looks at his crystal to see Boreal's point of view while he was attacking Lloyd. He soon ordered the dragon through it to bring him to the castle.

When the Resistance rounds the corner, they see Vex standing before them, holding his crystal, with the rest of the Blizzard Samurai behind him. 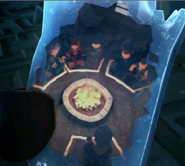 Add a photo to this gallery
Retrieved from "https://ninjago.fandom.com/wiki/Vex%27s_Crystal?oldid=394937"
Community content is available under CC-BY-SA unless otherwise noted.