View source
watch 03:36
Wiki Targeted (Entertainment)
Do you like this video?
Play Sound
“
Oh, well. Lots of things. Friendship, man, and-and-and love, and harmony, and trust, and truth, and courage, and you know, all the stuff that makes life worthwhile. Without those, I mean, what's the point? Right?
— Vinny to Garmadon in "The Fall"
„

Vinny can be seen holding a camera broadcasting the Great Devourer's attack on Ninjago City. He stands next to an NGTV reporter with a van behind them.

Vinny is holding a camera until Dareth crashes into him and knocks him over. Vinny then shouts that he quits and runs off.

Vinny filmed the ninja as they were arrested to be taken to Kryptarium Prison.

Vinny filmed Gayle while they traveled in a helicopter to get a closer look at Djinjago.

Vinny is seen holding his camera when he and Gayle Gossip are being attacked by the Sons of Garmadon. Dareth accidentally saves them by falling over and over but it seemed as if he was intentionally kicking them.

Dareth asked Vinny if he got that on film and is pleased he did. When he watches Gayle swoon over her rescue.

After Garmadon's defeat, Vinny attended the celebration for the ninja.

Vinny is seen when Cole, Zane, and P.I.X.A.L. arrive at the Harbor tent. Later, He and several citizens run from the darkness.

Vinny was at NGTV during the Oni's invasion. He tried to get a signal, but the Destiny's Bounty's audio did not reach him until he was just about to sign off.

Once the ninja arrived to rescue the NGTV staff, Vinny and other citizens head to the roof to climb aboard the Destiny's Bounty.

Later on, he accidentally stumbles upon Garmadon when looking for the bathroom. As he was in awe to meet Garmadon, he introduced himself and tried to leave, but Garmadon asked what is more important than surviving. After answering with friendship, trust, and the like, Garmadon was touched and excused him.

When Gayle voiced her frustration of Fred Finely covering the Elemental Cobras attack while she did the puppy petting competition, Vinny informs her that they're on-air and she was surprised and embarrassed but still reluctantly did the report. When an Elemental Cobra scares everyone away, Gayle chooses to pursue it and a reluctant Vinny comes along. They film Aspheera, who was looking for the Treacherous Deceiver that locked her in the pyramid and they both end up caught with Aspheera threatening them to reveal the location of the Ninjago Museum of History, which Vinny tells before they're both grabbed. Aspheera later had Vinny film her to show her speech to the city.

An Elemental Cobra held Vinny hostage while Gayle follows Aspheera to the museum. Once they got there, Gayle tells Vinny she thinks this would make great news, but he was unsure. Later, while the ninja and Aspheera's army fought for the scroll, Vinny dragged Gayle away.

Vinny is recording Gayle's broadcast on the Preeminent's arrival in Ninjago City when the Preeminent interrupts them and blows them across the city. After Samurai X saves them, Vinny watches them battle each other. At one point, Gayle reminds him to record the fight.

Vinny, Gayle, and Okino are surrounded by Red Visors but are saved when Unagami powers them down.

Vinny was present at Nya's memorial.

Vinny in March of the Oni 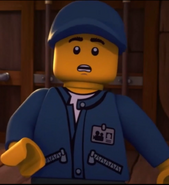