Stiix and Stones
70731 Jay Walker One

Note: Due to all ghost warriors being identical in appearance, it is impossible to determine who is who in the television series. As such, any appearances of a ghost warrior will be cataloged here, regardless if they are in fact Wail.

Finally free, the Ghost Warriors take over Stiix, turning all light sources green. The Ghosts revel in their victory, unaware that the ninja are trying to get the Realm Crystal. When they see Nya in Lloyd's gi, the Ghosts try to stop her.

The Ghost Warriors fly around Stiix when the Preeminent is released. When the ninja take out the stilts, the Ghosts help by making a shield of houses. They later dissolve in the Endless Sea after Nya unlocks her True Potential to drown their master.

Wail is a ghost who loves the thrill of the ambush. Sometimes, he will postpone a fight for an hour or two, just so he can start it by leaping out of the shadows. Morro would probably be annoyed by this, except that Wail has a habit of winning his battles. Oddly enough, despite his name, Wail never makes a sound.[link unavailable] 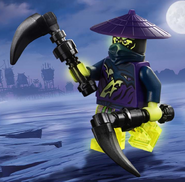