The Warrior Bike is a vehicle specifically manufactured for the Stone Army. It made its debut appearance in "Island of Darkness," where several were being used to guard Lord Garmadon's camp and pursue the Ninja to stop them from reaching the Temple of Light.

Despite its name, the Warrior Bike actually appears to be some sort of dragster-like vehicle. It has two large wheels on the back, and much of its long, narrow front is occupied by a jagged double tread resembling the teeth of a chainsaw. Just behind the cockpit is a pair of large fins or exhaust pipes somewhat resembling the horns on the helmets of the Stone Warriors. 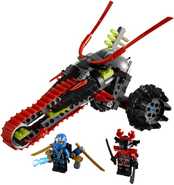 Add a photo to this gallery
Retrieved from "https://ninjago.fandom.com/wiki/Warrior_Bike?oldid=514244"
Community content is available under CC-BY-SA unless otherwise noted.