View source
watch 01:25
Jurassic World: Dominion Dominates Fandom Wikis - The Loop
Do you like this video?
Play Sound
“It means glory for Atta the Ratta. Glory for all rats! No longer will rats be seen as flea-ridden, filthy, verminous-”
— Ritchie, "The Meaning of Victory"

After the creation of Prime Empire

The Whack Rats (also referred to as the Brotherhood of Rats) are a team that appear in Prime Empire. They ride Speeder Cars and are followers of Atta the Ratta, and were Unagami's allies during the ninja's time in Prime Empire.

Ritchie is interviewed about what it would be like if he won the Key-Tana. Ritchie responded that he is racing in honor of Atta the Ratta and for the glory of all rats.

He then fights for a spot on the camera as other racers are interviewed.

Richie is seen when Leroy is playing Prime Empire.

A Whack Rat can be seen when passing by the ninja.

The Whack Rats ambush the ninja, but they are defeated and Nya ties up Ritchie. He tells the Ninja that he was sent by Unagami to stop the Ninja which makes the Ninja realize that Unagami is playing dirty.

Before the ninja leave, Ritchie reveals there's a glitch in the game the Ninja can use to bypass the Forest of Discontent. He promises to lead them due to having an itch he wants to scratch. Lloyd releases him and Ritchie leads them to the glitched portal where he jumps in.

The ninja follow suit and they are quickly surrounded by Red Visors. While the ninja are fighting, Ritchie leaves the room.

Some Wack Rats are seen walking around Terra Technica.

The Wack Rats are racing in the Speedway Five-Billion and knock Racer Seven out of the race.

When Jay pulls upfront, he gets side to side with Ritchie. They both recognize each other and Ritchie throws a bomb at him. Luckily, Jay ducks down in time for it to go over his jet and hit another competitor, sending it flying back and hitting other race vehicles as well.

Kai and Cole get close to a Whack Rat, and the Rat gets a Loot-Box. As a result, a spiked wrecking ball gets attached to his car by a chain. Kai manages to evade his attacks, but as Cole dodges, he accidentally gets stuck on the base of the chain. Cole manages to make his way up to the Whack Rat's car and throw its driver out, getting Cole a vehicle of his own.

Towards the end of the race, the Whack Rats then attempt to move Racer Seven out of first, but the Ninja get in their way. Racer Seven crosses the finish line first and wins.

Richie was seen on the TV screen when Cole told Lloyd what game he was playing.

The Whack Rats attempted to stop the ninja from finishing the Speedway Five-Billion, but the ninja were able to escape when they purposely lost and were teleported near the portal. 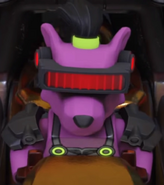 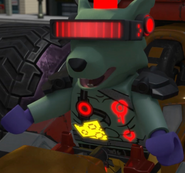 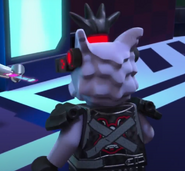