You may be looking for the set. For other uses of Lightning Dragon, see here.

“Thanks for helping out, blue boy.”
— Nya to Wisp, "Secrets of the Blacksmith"

Guardian of the Nunchucks of Lightning (formerly)

Deceased
Wisp was the Lightning dragon guardian of the Nunchucks of Lightning and Jay's pet.

After merging with the three other dragons to form the Ultra Dragon, Wisp was eventually caught and killed by the Dragon Hunters to make Iron Baron's throne.[1]

Years ago, Wisp was placed in the Floating Ruins by Master Wu to guard the Nunchucks of Lightning.[2]

When the ninja found the Nunchucks of Lightning on top of the Floating Ruins, Wisp appeared. The ninja escaped and the Lightning Dragon did not follow.

Jay and Nya rode Wisp to the blacksmith shop so Nya can pack up to move in with the ninja.

At some point, dragon pens were carved into the mountain underneath the Monastery of Spinjitzu and Wisp began living there under the care of the ninja.

When the ninja learned that Lord Garmadon had apparently returned, Jay mounted Wisp and flew it to Jamanakai Village, racing the other ninja along the way. After the threat had been discovered to be merely Lloyd Garmadon, Jay flew him back to the monastery. When the Hypnobrai attacked the village later in the day, Jay once again rode on Wisp as transport there.

After the ninja had left to destroy Lloyd's treehouse fortress, the ninja returned back to the monastery, only to find it engulfed in flames and that the Dragons including Wisp were trapped inside, the dragons were saved when Zane ordered Shard to put out the fire.

After the ninja discovered the Destiny's Bounty in the Sea of Sand, Wisp took up residence in some nearby ruins. However, the Lightning Dragon began to molt and left for the Spirit Coves where it merged with the other three dragons to become the Ultra Dragon.

Wisp looks similar to the Ice Dragon except that it has four legs, it is a darker blue, Jay sits on a saddle-like structure, and its tail is wider and can bend in different directions. He is the only dragon to have six limbs in the set. 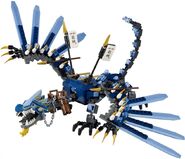