View source
watch 01:25
Jurassic World: Dominion Dominates Fandom Wikis - The Loop
Do you like this video?
Play Sound
“I hear they are the breeding ground for the truly despicable. And if you ask me, ho-ho, you are a handful.”
— Pythor to Lloyd, "Never Trust a Snake"

For a brief time after the Final Battle, Darkley's was run by Master Wu before he retired.

Clancee was too obsessed about becoming a pirate and left this school.

Prior to Rise of the Snakes

Misako would drop off her son, Lloyd, at Darkley's in hopes of protecting him while she studied the prophecy for the Final Battle, having anticipated his destiny as the Green Ninja and hoping to avert it.[2] Growing up in the school, Lloyd would become a rather incompetent, if an aspiring, student, often running off to pull harmless pranks that he pretended were acts of villainy.

Eventually, after being harassed by Finn, the school bully,[3] Lloyd was kicked out of the school due to his lack of skill. Shortly afterward, Kruncha and Nuckal became enrolled as staff members, substituting for the teachers from time to time.[4]

Upon meeting Lloyd for the first time in Jamanakai Village, Cole stated that he must have escaped his Boarding School for Bad Boys again.

When Lloyd first met Pythor, Pythor questioned why he ran away from the boarding school, in which Lloyd told him that he was actually kicked out for "lacking the immoral ambition of becoming one of tomorrow's masterminds." Pythor deceptively told Lloyd that he never should have intended to go to that school in the first place, and they should seek out vengeance instead. Manipulated, Lloyd agreed, and together the two ambushed the school, holding all of the students and staff members hostage, rigging the building with traps in anticipation of the ninja. The ninja, wary of their attacks, used the anchor of the Destiny's Bounty to drop through the roof and all of the floors, before making their way up, freeing the students and teachers and confronting the duo on the rooftop. Deciding Lloyd had lost his use, Pythor promptly stole the Map of Dens and escaped.

Sometime afterward, the school eventually underwent several extensive reforms, being changed to instead teach goodness as a result of unknown circumstances. Enraged, Kruncha, Nuckal, and the rest of the staff quit in protest, resulting in Noble and several others replacing them.

The ninja received a letter informing them that their last visit to the school had turned the students good and that Lloyd was invited to get an honorary degree. However, upon arriving, the ninja found out that Gene, Brad Tudabone, and the other kids at the school had overthrown the new teachers (the old teachers were too committed to evil) and taken them hostage, hoping to "undo the damage" that Lloyd had done to himself and the school's reputation by becoming good. When the evil ninja arrived at the school, at first the students wanted to help them, but they ended up deciding to team up with Lloyd and help the ninja defeat their evil counterparts instead. The students were successful in aiding them by disguising themselves as the ninja to confuse the evil ninja, and the staff was freed, reconciling with the children and settling their differences.

Following the Overlord's initial defeat at Lloyd's hands, Noble went on to become a warden at Kryptarium Prison, and Master Wu took possession of the school and renamed it "Wu's Academy." The ninja, with the exception of the school's former student Lloyd, became staff members alongside Dareth and Nya.

Although the school did well, it became clear that the four ninja did not enjoy their job: the students were undisciplined, and the teachers barely received any respect (Zane at one point was forcibly controlled by Brad thanks to an Ultra-Remote from New Ninjago City). Later, the students were invited to go on a field trip to Borg Industries, but when the Overlord returned to wreak havoc, the students were evacuated back to the school by Nya, who frantically searched for Lloyd, only to come across a lounging Dareth instead.

Following the loss of Zane and the temporarily split-up of the ninja team, Nya went back to the academy, hoping to resume teaching.

At one point, Kai visited the school to see Nya, but he rejected the idea of resuming teaching without the other ninja. After talking with Nya, Kai saw a flyer for the Ninjago Ice Rink on the school's bulletin board, which inspired him to get a job at the ice rink.

One of the classrooms

Pictured in the Temple of Airjitzu 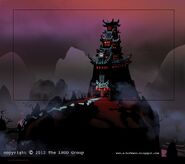 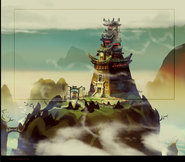