Not to be confused with a fairly popular drink in Ninjago.

Wu's Teas is a collection of twenty Ninjago shorts. It focuses on Wu's new tea shop, Steeper Wisdom, and their rivalry with a coffee shop over the road. It was released July 13th, in 2017. Each episode is approximately 1 minute 30 seconds long. It amounts to a full 22-minute episode of Ninjago and is called an "Episode" by the LEGO YouTube channel.

Wu, commenting on the success of his new tea shop, found Jay sleeping on the job. He asked him to retrieve some black tea but accidentally gave the location of his secret teas. The other Ninja overheard him and decided to disobey the Master.

They drank several teas, giving Kai the ability to float, shrinking Lloyd, growing Nya, making Cole glow red, and turning Jay partly into an octopus. Wu eventually caught them. When he asked why Kai is floating, Jay tried to cover for him, saying he learned from the internet. Master Wu bought the story, ordering them to get the black tea. However, Jay drank more of his tea, making him fully transform into an octopus.

Robot Manager stole Steeper Wisdom's customers with her spinny sign. Kai competed with her in a spinny sign off but burned his shop in the process. Robot Manager saved it by fanning the tea shop with her sign and put out the fire on Wu's clothes with tea.

Dareth played horribly on his clarinet. After Lloyd nervously told everyone to applaud, he told the Ninja the audience is bored. Jay gave the team Musicalitea, improving their ability to play songs.

As the Ninja played another song, Wu found out they drank Musicalitea, which is untested. They played too hard, promoting Master Wu to tell Dareth to play his clarinet because if they continued playing, they would play the "Nuclear Note," which gave the hint that it would only most likely cause destruction.

Cole came back from the coffee shop with his name on his cup wrong. This gave Lloyd an idea to get the customers' names right or Cole gets dunked into a giant teapot.

They get most of the names right but called Dareth "Darren" instead. With that, Dareth gets to dunk Cole with a giant teabag.

Jay bought a hand zapper and plan to shock Kai to impress Nya. Jay gets his anger out of control when he catches her with another handsome guy and decides to drink Beautea to impress her instead.

As everyone swoon over him, Jay flirted with Nya. He soon shook hands with the other guy, ending up shocked as the guy also had a hand zapper. As Jay laid on the floor in pain, Nya says how she loves funny guys.

Kai, in charge of taking out the trash, decided to hide it under the floorboards. The health inspector came, checking everything a success.

Meanwhile, Nya and Kai noticed the floorboard is about to give. They tried to hide it the best they could, but after they got a perfect score, trash flew everywhere, with the inspector giving them a bad score instead.

Wu threw away Monstrositea tea bags into a sink of water because it's getting old. He later found Nya with a panda cub asking if they can keep it. Wu reminded her no animals are allowed but changed his mind when it attracted more customers into his shop.

The panda found its way into the sink with Monstrositea, causing it to grow and go on a rampage. Wu, once again, changes his mind about the policy.

Jay, being lazy, asked Zane to do the dishes while he watches TV. While Zane complains how he does most of the chores every day, Jay changes a few channels, discovering it also controlled Zane. He used this to his advantage, making Zane do all the chores.

He accidentally broke the remote. With Zane free, Jay tried to defend himself by saying their chores are done. Zane, not amused, froze Jay in a block of Ice while he takes his place on the couch.

Lloyd went to the coffee shop to give Robot Manager a tea kettle, which was actually a trap, with Kai inside it to discover what's in Robot Manager's coffee that makes them taste good. She, however, threw it away in a dumpster full of banana peels. Kai reported that this was the coffee's secret ingredient.

Wu ordered Cole to sweep the floor. However, he found the dust on the floor rather than in the dustpan. Confused, he tried multiple times but found out it consumed his broom. He attacked it with multiple objects, making the pile grow bigger. He vacuumed it instead, but it exploded, making the dust go everywhere. Wu, still found the shop dirty, asked Cole to continue to sweep it.

Jay found the stove isn't working and asked an unusually calm Kai to boil the teas with his fire. He found out he drank Serenitea, which makes him calm and meditating. Jay failed to get him mad by insulting him and disrupting the peace, but calmly told him he will ask Nya out on a date. This made Kai angry, and negated the effects of the Serenitea, allowing Jay (charred to a crisp) to boil the tea for the customers.

Zane, disguised as a maintenance bot, tried to get close enough to the coffee shop's espresso machine in order to freeze it. Robot Manager, suspicious at first, allowed him to the machine, completing the mission.

Robot Manager served a customer who asked for hot coffee using the machine, but much to the Ninjas' shock, it actually tasted good. The coffee shop then had customers flooding into the store, with Zane being disappointed.

Lloyd, who was late to his shift for the third time in a row, and not in the mood to clean toilets for being late (again), tries to avoid the many disasters happening in Ninjago, such as floods, a parade, and car accidents while heading to Steeper Wisdom. When he got there, he noticed the shop is empty and decided to pretend he was there the whole time. Master Wu, however, knew he was late and gave him his punishment to clean the toilets.

Wu asked the Ninja who took his white tea. When no one spoke up, Jay set up a security system to catch the thief.

However, the following morning, they found out it was actually Wu, sleepwalking into the shop. He blamed the robots for stealing his pajamas, his favorite teddy bear, and having his taste in tea, only to hear the amusement from others. He then told everyone to get back to work before one of the traps is soon sprung.

Cole, not wanting to do chores, had a bet with Jay in a coin toss: heads, Jay has to do both their chores, tails, he leaves and doesn't have to do anything. Jay flipped the coin but it landed on one of the support beams. He grabbed a ladder to retrieve it but knocked down everything in the process. Cole noted it landed on tails and left the room. Jay complained but then found out Cole tricked him to misunderstand the bet.

Nya painted a mural outside Steeper Wisdom but due to the weather—heat, wind, and lightning—her mural is always messed up. She eventually poured paint on herself and used Spinjitzu to fix it, but made an even better painting than she expected.

Cole told the customers that if they can beat Zane in a game in chess, they can get free tea. However, he won them all, much to everyone's amazement. The Robot Manager challenged him but was able to win. When she went to get her tea, Zane's queen fell out of her sleeve, getting herself thrown out for cheating.

Ronin convinced Wu to enter a taste test to win a golden mug so that they don't have to do business anymore. When they lost to the Robot Manager, Ronin cheered saying he owned both the coffee shop and Steeper Wisdom. He went to get the mug—which is actually an ordinary mug spray painted gold with wood glued on—and told Wu he competed to get publicity.

Wu and Robot Manager met up, agreeing to be friends rather than rivals. They soon see a stand selling free juice and decided to get some.

For the transcript of the episode, see here. 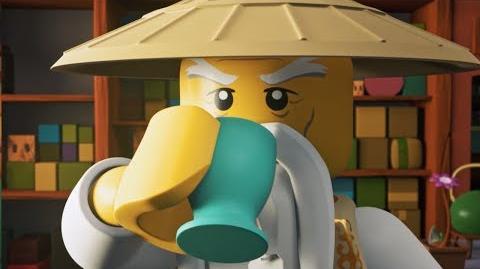