View source
watch 01:54
Obi-Wan Finale - The Loop
Do you like this video?
Play Sound
“To prove their courage, they must survive five minutes in a room with one of these.”
— Wu to the ninja in "Wasted True Potential"

Unknown (Season 13 blooper reel)
An unnamed chicken is Wu's pet that he caught around the Monastery of Spinjitzu at some point after the Oni's invasion to keep the ninja from getting out of shape.

At some point, Wu caught a chicken around the Monastery of Spinjitzu on the Mountains of Impossible Height upon seeing his ninja become lazy.[1][2]

After catching them in their hot tub which they made out of a sacred bell, Wu gives them a lecture on monks who became ninja and combat strange animals while the chicken was in a nearby box. Wu then tells them to survive five minutes with what was inside and left. When the box opened, revealing the chicken, the ninja assumed it was a joke until it suddenly charges up and attacks them. They all manage to grab the chicken and put it back in the box in less than five minutes.

Later that night, when Cole goes for a fridge raid, the chicken was in it and attacked him.

The following morning, after defeating his ninja easily, Wu unleashes his chicken on them as punishment.

The chicken was seen pecking at the ground while Wu swept nearby when the ninja came back, following some failed quests, dead ends, or false leads when helping the Ninjago Police.

As the ninja unintentionally overpack, Jay was chasing after the chicken as it wore his travel pillow before grabbing it. It tries to grab it again, but Jay moves it away.

A small montage of what the ninja were doing showed one with the chicken chasing Lloyd, Jay, and Zane for having a picnic.

While the Pyro Vipers were searching for Wu, the chicken attacks a Pyro Viper in the kitchen.

After getting the wrong bag, Lloyd tries to go for the other bag containing Traveler's Tea. However, he comes across the chicken. He tries to shoo it away, but it blasts him out of the room before landing next to Wu, who pets it for its accomplishment.

The chicken passes by Wu and P.I.X.A.L. as they try to create a portal to the Never-Realm.

A pixelated version of Wu's chicken can be seen as a battle opponent for Lloyd.

The chicken was with Cole as he plays Prime Empire, but struggles to play itself before Lloyd comes in, and decided to play it. It later chases the Postman away.

When Kai and Jay had a bet on who would break the most bricks for a cookie, they almost inadvertently knock some of the pieces at the chicken. It later looked at the hole in the wall where the bricks originally were. It then swiftly grabs the cookie that Jay tried to eat before Wu inadvertently sent it to Zane, who passes it to Kai, only for it to be tossed to Cole when Wu scared him before the chicken caught it in its beak. The chicken then stood on the wall before jumping off when it collapsed.

When it was discovered the quest to rescue Wu was a vision created by him to teach each Ninja a Virtue and as he complimented them, the chicken comes up behind Nya, flies onto Cole's head before dropping the cookie into his hand and later flies onto Zane's lap.

The chicken is laying on Nya's bed when Maya goes to check up on her before she starts to clean up the room, and forces the chicken out of the room.

The chicken attacked a Maaray Guard and later came to pay its respect at Nya's memorial.

The chicken lies on Dareth as he tries to think of a way to secure the Ninja's release. 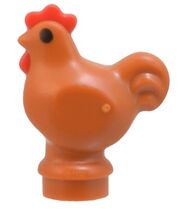 Physical version of the chicken in "Arrivals, Discoveries and... chickens..."

Turnaround of the chicken's 3D model 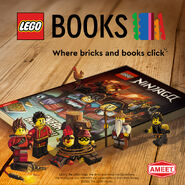 About to attack the ninja

Catching Lloyd in the act

Being petted by its master

The chicken passing P.I.X.A.L. and Wu

Being lazy with Cole