My research revealed the location of the Yin Blade, a weapon whose magic was so powerful, it was said to hold the key to eternal life. Control that magic and I'd be forever remembered as Ninjago's greatest master.

Master Yang to Cole in "Day of the Departed"

Destroyed
The Yin Blade was a sacred and extremely dangerous artifact used by Master Kodokuna Yang. It resembles an Aeroblade attached to a handle with a chain. While its blades are sharp, it is intended to be used as a mystical tool rather than a weapon, with the ability to open rifts in the fabric of reality and the potential to unleash great devastation if broken.

While searching for the key to immortality, Master Yang's studies led him to discover the Yin Blade. Experimenting with its mystical, life-giving properties, he used it to restore the life of deceased flora, before attempting to use its magic on himself in order to achieve immortality. However, the experiment was flawed, and instead, it resulted in him and his students becoming ghosts, trapped between the realms of the living and departed and unable to leave the Temple of Airjitzu. Sometime afterward, the Yin Blade was discovered and transported to the Ninjago Museum of History, where it was encased in a case of Clearstone and put on display in an exhibit.

While exploring the Hall of Villainy exhibit, the Yin Blade was discovered by Cole, who discovered its relation to Yang, even as the Master himself set his plan in motion by goading Cole into bringing the artifact to him, taking advantage of The former's panic upon the discovery of his fading existence. Terrified and demanding answers, Cole complied, bringing the Yin Blade with him to the Temple of Airjitzu, confronting Yang with the weapon and attempting to attack. However, he accidentally shatters a jar containing an exit from the Departed Realm and activates it, freeing the souls of Samukai, Kozu, Cryptor, Chen, Morro, Eyezor, Zugu, three Nindroids, and two Stone Swordsmen and Stone Scouts, releasing them onto Ninjago, where they all possessed mannequins of themselves at the Ninjago Museum of History.

Triumphant with the presence of the Yin Blade and the souls of past villains to distract the rest of the Ninja, Yang proceeded to seize the weapon from Cole with the help of his deceased students and explained his plan to use the eclipse to catalyze the powers of the Yin Blade and cut a rift through reality that would allow him to escape from his state of limbo.

With the Yin Blade in hand, Yang proceeded to go to the roof of his temple and activated the artifact, using its reality-warping powers to open the Rift of Return. However, Cole, confronting him, attacked Yang, forcing the latter to defend himself with the Yin Blade. He succeeds, slicing apart Cole's weapon in the process. However, when Cole's friends arrived to support him, he unlocked and used his RX powers to attack Yang, who attempted to shield himself with the Yin Blade. Unable to withstand the assault, the Yin Blade was shattered by Cole's attack, and with its destruction and the ending Yin-Yang Eclipse, causing the Rift of Return to close as a result.

A mysterious artifact of unknown origin, the Yin Blade had life-restoring abilities, being able to bring deceased flora to life with its rejuvenating abilities. Despite these miraculous powers, however, the Yin Blade was also flawed—when used to grant Yang immortality, the attempt backfired, instead it turned him and his students into ghosts, traping them between life and death.

Aside from these abilities, its blades also had the ability to tear rifts through the fabric of reality itself, allowing it to create passageways through realms to a limited extent, and could tear apart most weapons with ease as a result of its incredibly sharp blades, rivaled only by the Anacondrai Blades. These abilities, when catalyzed by the magic of the Yin-Yang Eclipse, were potent enough to even create exits from the Departed Realm, a feat that even the Realm Crystal is incapable of.

Its reality-splicing abilities also allowed it to curse and confine victims within a certain area, although some, such as Cole, are able to escape the full effects of this if they escape the Yin Blade's area of magic in time. The effects of its curses are practically permanent, able to last hundreds, if not thousands of years, and cause affected areas to become linked to other realms and the Ethereal Divide at night.

Naturally, the Yin Blade is fueled by a massive amount of incredibly powerful magic, granting the sacred tool its restorative and reality-splicing abilities.

Although it is dangerously sharp, the Yin Blade wasn’t intended for combat. It’s packed with so much magic that if it broke in a fight, the consequences for the entire universe could be devastating. Designed to cut open rifts in reality, swinging it around just to prove you can do fancy moves is not a good idea.[1] 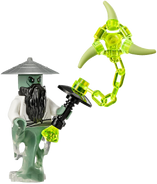 The Yin Blade with Yang's minifigure. 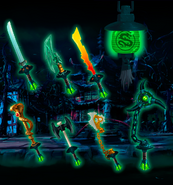 The Yin Blade with the rest of the Departed Blades.

The Yin Blade on display at the Ninjago Museum of History.

Cole armed with the Yin Blade upon arriving at the Temple of Airjitzu.

Young Yang with the Yin Blade.

Yang moments from using the Yin Blade to open the Rift of Return.

The Yin Blade opening the Rift of Return.