Not to be confused with the actual set.

The Titan Mech (also known as the Ice Mech) was a Mech that was used by Zane to climb the Wailing Alps. It is Zane's first mech and was used to accompany the rest of the Ninja in their journey to the Blind Man's Eye.

Zane's Titan Mech is used to climb the Wailing Alps along with Kai, Jay, and Cole's mechs. When the other mechs are destroyed, the other Ninja use Zane's mech to catch up to Morro, with Cole possessing it to make it go extra fast to make up the lost ground. At the Hanging Temple, Zane uses his mech to fight Ghoultar and the Mech-enstein. When he realizes he can't win, Zane uses grappling hooks to attach his mech to the Mech-enstein and ejects himself from his mech before both mechs are sent rolling down the mountain.

The Titan Mech is upgraded with Deepstone cannons by Cyrus Borg, and is used to fight the ghosts during the Battle of Stiix.

The Titan Mech is used to battle the ghosts for a while, even after the Preeminent emerges into Ninjago. Upon its arrival, the beast began wreaking havoc, with the Jay Walker One being destroyed by it and the Ghost Cycle being lost in an attempt to destroy it. The Titan Mech was the last operating weapon of the Ninja during the battle, up to the point when The Preeminent seized it with one of her tentacles and dragged it off. 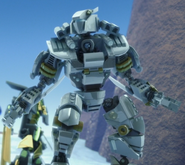 Add a photo to this gallery
Retrieved from "https://ninjago.fandom.com/wiki/Zane%27s_Titan_Mech?oldid=516234"
Community content is available under CC-BY-SA unless otherwise noted.