Ninjago Wiki
Register
Don't have an account?
Sign In
Advertisement
in: Ninjago: Masters of Spinjitzu, Objects, Technology,
and 14 more
English

View source
watch 01:33
Wiki Targeted (Entertainment)
Do you like this video?
Play Sound
“
Your power source. It's a technology I am unfamiliar with. Your father built you with spare parts, yet this piece, it's unique.
— P.I.X.A.L. to Zane in "The Art of the Silent Fist"
„

The Art of the Silent Fist
70724 NinjaCopter

Half destroyed, half unknown (original)
Intact (current)
Zane's power source, also referred to as his heart, is a mysterious blue substance formerly used to power Zane and later P.I.X.A.L.. After the destruction of his original body, Zane has a new power source with the same appearance as the original.

After Zane is damaged by the Nindroids, P.I.X.A.L. repairs him and notices his power source. She notes that despite Zane's father building him from spare parts, his power source is unique. She tries to inspect it but this causes an electrical shock to Zane.

After the ninja shut off the power in Ninjago, Zane decides to have Nya transfer half of his power source into P.I.X.A.L. in order to revive her. When Techno Wu attacks, Zane finds his combat skills are inhibited and he is unable to perform Spinjitzu, though P.I.X.A.L.'s fighting skills have improved and they are able to perform Spinjitzu together.

Cyrus Borg explains that Zane's power will allow the ninja to go into the Digiverse.

To get off of the Delta V comet, the ninja built a rocket which they hold together by hooking up Zane's power source. Zane realizes his power source has reached its limit and will soon explode, but Lloyd points out that the ninja can use their elemental shields now that they've entered the atmosphere, sparing Zane.

At Zane's memorial, Kai speaks on what powered Zane, saying that he liked to think it was brotherhood.

After rebuilding himself and being imprisoned on Chen's Island, Zane finds P.I.X.A.L. dismantled. What happened to her remaining half of the power source is unknown.

After P.I.X.A.L. rebuilt her physical body as the new Samurai X, neither she nor Zane physically hold the power source.[1] However, Zane retained a power source in the same location in his chest and with the same appearance. 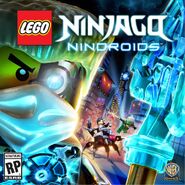 On the cover for LEGO Ninjago: Nindroids 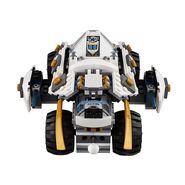 Light from P.I.X.A.L.'s half of the power source

The power source design on titanium Zane's back 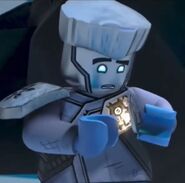 Night of the Nindroids cover