Ninjago Wiki
Register
Don't have an account?
Sign In
Advertisement
in: Ninjago, Ninjago: Masters of Spinjitzu, 2019,
and 13 more

View source
“Behold his treachery. One moment he speaks of friendship, and the next, he tries to steal your scepter.”
— Vex to the Ice Emperor, "A Fragile Hope"

Destroyed
Zane's scepter was a naginata used by Zane as the Ice Emperor. It was powered by the Scroll of Forbidden Spinjitzu that was stolen by Lloyd, Zane, and Nya from the Explorer's Club and the elements that empowered it.

The scepter (a normal naginata attached to a Scroll of Forbidden Spinjitzu at the time) was discovered by Clutch Powers at some point and gave it to the Explorer's Club.

Zane saw it being held by himself, as the Ice Emperor, in his dream.

Upon learning the location of the second Scroll of Forbidden Spinjitzu from Clutch Powers, Lloyd, Zane, and Nya break into the Explorer's Club and steal it.

Shortly after being claimed, Lloyd, Zane, and Nya brought the Scroll back to fight Aspheera. They each held it one at a time (except Kai, whose powers were stolen, and Nya, who doesn't hold it at all) until Zane manages to use it to freeze Aspheera. Zane briefly hesitated in giving it back to his master but relented. As he was about to give the Scroll to Wu, Aspheera fired a blast, which Zane takes, banishing him and the Scroll to the Never-Realm.

When Zane was sent to the Never-Realm, he fell from a portal in the sky and dropped the naginata and found he was trapped. When he tried to use his Ice Powers, he saw that he was too damaged, until he reluctantly uses the Scroll to boost his Ice Powers.

Later on, he used the Scroll to hold off the Ice bird, something that amazed the eavesdropping Vex. Zane uses his powers to create the Ice Cave and places the weapon down while he was rebooting in the cave, as Vex took it and attempted to kill Zane with it, only to find that it was useless in his hands, since he lacked power. Removing the plug to erase his memories, Vex persuades the now amnesiac Zane that he is the Ice Emperor, and the Scroll was his scepter. He uses it to turn Grimfax's soldiers into Blizzard Warriors and turns the whole realm into an eternal winter with it. After doing so, the scepter became frozen to his hand while freezing itself.

In P.I.X.A.L.'s dream, Zane gets banished to the Never-Realm along with the scepter.

Zane held it on his throne in the throne room.

Zane attacked Grimfax with it by creating icicles that came up from the floor to freeze him. When Vex talks to him about Lloyd, he says that he'll send Boreal to attack Great Lake while Lloyd will have another fate.

Zane later used it to summon his dragon Boreal, by banging it on the ground, causing a tremor that wakes the dragon.

When Lloyd was brought before the Ice Emperor, he realized that the staff was one of the Scrolls of Forbidden Spinjitzu. He also realized to his horror that the Ice Emperor was Zane and that his former friend was being corrupted by its power.

After finding out his friend was corrupted by the Scroll of Forbidden Spinjitzu, Lloyd attempts to get the scepter away from Zane. However, Zane desisted Lloyd's attempts and knocked him unconscious with the power of the scepter.

When seeing Akita, Zane believed she came for his scepter before she revealed that she came for revenge on the fate of her people. Zane used the scepter to fight off the Formling and froze her arm before Lloyd burst in.

Zane fought Lloyd with the Scroll and overwhelmed him. This warranted attention from Akita who tried to intervene but was frozen by Zane in the process. Zane then took advantage of Lloyd being distracted and half-way froze him. Lloyd was at his mercy but Zane relented in disposing of him and Vex moved to do the job himself. Vex taunted the Green Ninja about his failure to protect everyone and tried to destroy Lloyd but Zane regained his memories and used the staff to knock Vex away. Zane snapped out of his delirium and destroyed the Scroll, in the process freeing all those around the realm from corruption, liberating those frozen in ice, and releasing the realm from the eternal winter.

The Ice Emperor used his scepter to open the next portal for the ninja. 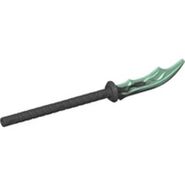 The naginata in the Explorer's Club.