Zane is a protagonist in LEGO Ninjago: Shadow of Ronin.

After relocating to Spinjago, Zane listened to Kai retell the events on Chen's Island, though pointed out that he was still held captive when they visited his temple. Following his story, the Ninja began to train but that was interrupted by the arrival of Ronin, who stole the Ninjas' memories using the Obsidian Glaive.

In the hopes of finding a way to restore their memories, Wu sent the Ninja to speak to Hibiki at Kryptarium Prison. After dispatching with Ronin's goons, they learned of the Inky Lemonberry in the Toxic Bogs and went to pick up Nya from Ed & Edna's Scrap N Junk.

Once arriving in the Toxic Bogs, Zane drank the Tea of Insight and learned that the Obsidian Sais were hidden in the Ice Temple in the Frozen Wasteland.

Deeming Kai's fire abilities useful for the Frozen Wasteland, the Ninja (apart from Jay) agreed to get the Obsidian Sais next and they traveled to the Ice Temple. There, Zane remembered that Ronin was the one who took him to Chen's Island and listened as Kai and Cole recapped Zane's death for Jay. Before they could go to the Lightning Ruins to retrieve Obsidian Nunchucks, Nya called Kai reporting that the Nindroids were attacking New Ninjago City. 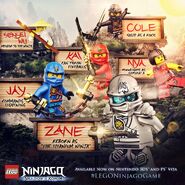 Zane remembering his capture by Ronin 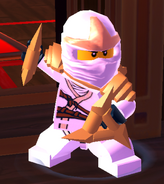 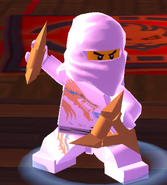 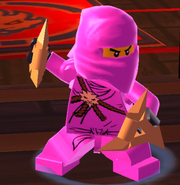 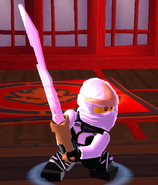 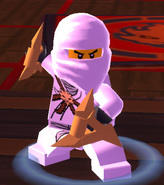 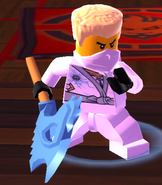 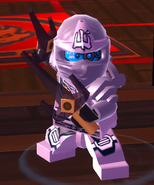 Add a photo to this gallery
Retrieved from "https://ninjago.fandom.com/wiki/Zane_(Shadow_of_Ronin)?oldid=388197"
Community content is available under CC-BY-SA unless otherwise noted.